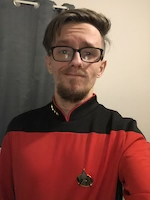 1. CinC/DC Report:
Miles - Sorry to all CO/XO I won't be able to attend. I have to work. If you have any questions or concerns feel free to forward them to Luc or drop them to me and I'll get back to you ASAP.

Kermie - Nothing to add at this time

2. Chief of Staff Report:
Greetings everyone.

Since the last meeting Draco resigned to focus on his health, with that the position of Vice Chief of Staff becoming vacant. However this will not be filled at this time. This is something I will look into later in the future when it might be necessary. Beside that I got nothing else to add, so if anyone has questions and such feel free to ask.

3. FLOPS, R&R, Personnel Report:
P&A - I just wanted to remind everyone about the Citations and Commendations... It is really a great way to boost morale among people. Everyone who has received one of the others have been quite thankful so far. Just one or two a month from each of you to your crew or others you see doing good things can make a big difference.

So far, I put in most of them... which is a problem because I don't know most of your personnel... if you could help me with it, I would appreciate it.

If you are unsure how to proceed with them, there are instructions in the P&A area of the forums.

And you can always message me, I am more than happy to help with collecting your thoughts and helping to write them.

FLOPS - Alrighty, well I just generally had two things on the Fleet Operations front for this month.

Firstly, If you ever feel like you have a question or are in need of support with your MSR, please do not hesitate to contact me as I'd be more than happy to help.

and secondly, just a general reminder that your MSR's will be due on October 6 at Midnight SLT, and to try to keep them as upto date as possible at all times (a formal email/discord/forum reminder will still be going out closer to the end of the month)

4. Ship of the Line Reports:
HQ continues to serve UFS members as best we can, while we do not have specific roleplay days there are aspects where In Character activities are happening.

I’m starting to get more people interested in being part of the Colony, rather than a ship or station which to me is a good thing as it adds more options for a member.

The main focus is to look after those that do not want to join a ship or station, or have not yet found one (unassigned)
Our missions have centered on the Yadhi story arc where we have managed tensions between two factions of the Yadhi, two factions of Treman and a mysterious weapon supplier. Our ship has been attacked three times now by Zsche extremists. We have avoided damage to our ship and loss of life to our attackers on the last two occasions. Full details in the ship’s logs.

We have started conducting missions on a second day each week, Sundays at 3pm. The first Sunday mission was a parallel mission to the Yadhi arc, the transfer of a captured ship to its rightful owners. This extra RP slot is more convenient for some players and lets us blood people with leading roles and command experience.
Nothing to report
The story we are currently engaged in is a holo-novel where the station computer sampled various tabletop fantasy games from Earth's history and formulated a unique fantasy scenario for the crew to play through.

Our current scenario is set in the Elder Scrolls world during the Oblivion Crisis (Elder Scrolls Iv: Oblivion for our gamers out there) but instead of being set in Cyrodil it's set in Skyrim.

We are part of the Companions, a mercenary companion of renown fighters, who are investigating rumors of an Oblivion portal opening in western Skyrim.

We arrived in the town of Drellin's Ferry (non-ES canon). This town is divided in half by a fast moving river, but there is a ferry to move between sides. We found the eastern half of the town had been seized and razed by a group of Orcs.

It turns out more than Orc were on the opposing side. A group of vampire sorcerers used magic to create ice bridges for groups of Orcs and skeleton warriors to invade the west part of the city.

Right before the battle we got word that the simulation had been infected by an unknown virus that had locked out controls to end, freeze, or alter the program. We couldn't even force the arc to appear. Not only were we effectively trapped but the safety protocols had been disabled putting us at great risk.

The hacker goes by the moniker "Soul Splitter" and is represented by a Daedric Lord that is controlling the invading army and is currently on the other end of an Oblivion portal.

As the virus takes over, the Soul Splitter's power over the program will grow until he has complete control, and then we will be powerless to stop him. We have one chance to stop him. We must enter Oblivion, find the Soul Splitter and defeat him.
With Nora settling in again, I know she's got an idea in mind, but RL is certainly working to keep her busy. We definitely have one in the works, but need to knock out the idea.
We are still in the story arc with the Durant crew on the Class M planet with the Priki tribe. The Crew members have violated the Prime Directive by letting the primitive tribe see them and the crashed shuttle along with the rescue shuttle, there's also a phaser that was lost. The crew members also had conversations with the Priki tribe and the Science officer, Ensign Carol Ellsworth, who has a lot of medical training, treated members of the tribe and showed them how to use more of the plants as medicine. She and Lt. Selina Otsuka will help the Priki tribe find a new home because the caves the Priki tribe moved into have radioactive material in the walls of the caves and that is the reason many of the tribe members have died. So, the officers have violated the prime directive. Fleet Captain Evelyn Rieko has ordered Lt. Col Elsa Mitchell and Lt. Sandra Lacrima to return to the planet to remove the damaged shuttlecraft, the phaser Ensign Ellsworth lost, and all traces of technology.

Another problem is Ahnee and other members of the Priki tribe have vowed to Carol that she will be remembered and worshiped always because she saved the tribe from extinction. And the story of the Strange Ones that came from the sky and Carol their savior will always be a part of the history of the Priki and painted on many cave walls now and through generations to come.

The Durant CO, Fleet Captain Rieko will read their reports /logs and decide to have a hearing concerning the violations of the Prime Directive. The Durant XO, Captain Hal Jordan will be the crew members' defense counselor. There may be an Admiral that will preside over the hearing and FCapt Rieko will state the case against the violators based on their reports, and Capt Jordan will state the opposing stance, that they are innocent.

The Prime Directive prohibits Starfleet personnel and spacecraft from interfering in the normal development of any society, and mandates that any Starfleet vessel or crew member is expendable to prevent violation of this rule.

As the right of each sentient species to live in accordance with its normal cultural evolution is considered sacred, no Starfleet personnel may interfere with the normal and healthy development of alien life and culture. Such interference includes introducing superior knowledge, strength, or technology to a world whose society is incapable of handling such advantages wisely. Starfleet personnel may not violate this Prime Directive, even to save their lives and/or their ship, unless they are acting to right an earlier violation or accidental contamination of the said culture. This directive takes precedence over any and all other considerations and carries with it the highest moral obligation.

Captain Jean-Luc Picard of the starship Enterprise-D: "The Prime Directive is not just a set of rules; it is a philosophy... and a very correct one. History has proven again and again that whenever mankind interferes with a less developed civilization, no matter how well-intentioned that interference may be, the results are invariably disastrous."

Durant News: The crew morale is high. We always have fun in our Mission RPs and chatting together!
We are going through a period of adjustment, where Draco has stood down and Rowena has stepped into the post of CO, with James moving into the XO role. We’ve also changed our set location and a new build is currently underway. It’s accessible through the main transporter network and the lifts etc are set to the main UFS group. If you do come for a nose around, please remember it is under construction and not all doors lead to solid floors. And it’s a looooong way down

RP wise we have completed the long running saga of “James Williams: Fugitive” and will be beginning a series of shorter running storylines. We are also starting a trial where we have a second RP day, currently set for Mondays from 1330 slt. We aim to start that this week depending on how people feel on the day due to RL events.
USS Veracruz did their Star Trek anniversary celebration event with a TOS throwback arc on the USS Hood. There, our alternate selves saved the USS Ticonderoga, which had been found adrift after a battle with the Klingons, with no crew aboard. An investigation found them to have beamed aboard a nearby planet for safety. After rescue, a battle with the Klingons rounded out our celebration of the TOS era. Captain Dodge and crew live to see another storyline, someday!
Denkiri 'Mind Melds' continue bi-weekly each week on Tuesdays & Fridays

Chief of Operations:
From the Operations section of things regarding the Task Force.
With Nora settling in again, I know she's got an idea in mind, but RL is certainly working to keep her busy. We definitely have one in the works, but need to knock out the idea.