Originally Named for Admiral Peedy Thor. The Sovereign Class ship is assigned to protect and serve United Federation Starfleet. With a dual assignment of both exploration and defence, The ship is available to serve a multitude of needs for the Federation.

USS Thor and it’s crew are on a ‘protect and serve’ mission in the deepest parts of the Delta Quadrant, championing the Federation’s philosophy and ideals under the motto ‘For Those That Came Before’

Disaster strikes as an explosion rocks the ship! Main engineering is sealed and fires break out on multiple decks. Captain Dimanovic is trapped in main engineering with injured officers as a coolant leak risks triggering an explosion. LtCmdr Williams and Ensign Heath manage to enter main engineering and seal the leak before it ignites and incinerates the ship. With main power failing, communications down, sickbay inundated with casualties, the crew battle to get control of their stricken vessel.... 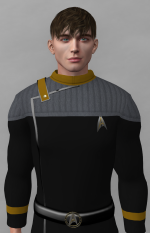 I arrived at my duty shift to find that a shuttle had just dropped off a fresh set of visitors aboard the USS Thor. Among them was Ensign Lancetti who was visiting us from Pinastri. I was detailed by the CO to aid the XO, Captain Vandread-Rose, in a tour of our ship. I proceeded with haste to join the XO and Ensign Lancetti in 'The Den' crew lounge. We proceeded through the decks together showing Ensign Lancetti the various rooms and functional areas aboard the ship, she seemed to take a good interest in our outfitted Science Lab. In the corridors of the Science Deck we came across the Security Chief, Lt. Cmdr. Williams. We conversed some before the unspeakable happened. An explosion rocked the ship and the blaring lights of the Red Alert flooded the corridors, along with its corresponding klaxon. We stopped the tour and immediately made our ways to our stations on the Bridge. On the bridge we provided the XO with a status report. On TAC II, I provided a sensor sweep on both internal and external sensors... we needed to find out what that explosion was and what damage it had done. At the XO's request, I found the Captain in Main Engineering and relayed this to the XO, along with the news that Main Engineering had gone into lockdown. The Chief reported internal damage to bulkheads on Deck 14, and relayed the order to send fire control teams to aid. I was receiving a large amount of reports of medical emergencies also and dispatched medical teams from my console.

Unfortunately, transporters were down, so beaming people out of Main Engineering would not be an option. The XO ordered Ensign Lancetti to contact Command, requesting emergency assistance, but the communications system was also down.

I further reported that the Warp Core was holding, but environmental systems were down and that the occupants of Main Engineering, along with the CO, would run out of breathable air soon and that the chamber was filling with toxic fumes from the coolant leak. The Chief further confirmed that the vents would not respond as they were dependent on the life support systems, that had already failed.

The number of crew injuries steadily increased, with reports indicating that 16 crewman had been injured around the exterior of Main Engineering, along with 2 crewmen that died. The dispatched medical teams were transferring the crew to Sickbay for triage.

The Chief reported that radiation levels were rising at a fast pace inside Main Engineering. Suddenly, the internal comms system from Main Engineering activated, and we could hear the CO's voice. I patched a visual of the Captain through to the main viewer. The CO reported that a coolant leak had occurred, there were large fires towards the opposite side of Main Engineering, and he would require fire suppression equipment. The Chief remotely unlocked the cabinets on the upper level from his console.

The CO reported 7 injured and 3 critical injured crewmen inside Main Engineering. We completed an immediate emergency shutdown of all engines. The CO ordered for us to hail Starfleet Command and indicate a condition red. Despite Ensign Lancetti's efforts, the comms system was just not responding.

I reported further causalities on Decks 9 through 14 and reported to the XO that medical teams are becoming overwhelmed by the number of injured crewmen. There was also a cascade of power failures on Decks 9 and below, with Life Support failing on those Decks. The Chief reported that they only had 15 minutes of oxygen left, but the coolant leak would flood the room much sooner than that.

The CO ordered for a team to enter and stabilise Main Engineering, if we could. The Chief and I proceeded to gear up in EVAs and headed to the Engineering Deck. On the way, the XO informed us that we would have less than 10 minutes from opening the blast door to get the coolant leak under control, or we wouldn't be coming back out. We stood in front of the large red blast door to Main Engineering and informed the XO that we were ready to enter. As soon as those doors opened we rushed inside, I helped the CO pull out the injured crewmen, whilst the Chief immediately surveyed the leak. The Chief took a sheet of metal and I helped him move it over to where the leak was. It was extremely hot in there, but the Chief managed to wrap the sealant sheet around the leak and activate it. The leak was sealed. We left for Sickbay to help the injured to medical help. Once completed, we made our way back to our stations on the Bridge and reported for duty... there would be no time for off-duty, we were in the middle of a crisis here. Chief of Staff to the Chief of UF Starfleet Communications