A ceremonial escort of the Yinjin Kajj from Jin IV to Jin Prime led to the destruction of a Zsche vessel- and a Federation starship was involved. 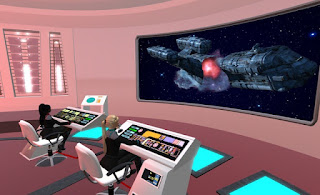 According to reliable sources, the USS Neil Armstrong was performing a diplomatic mission, on behalf of the Yadhi people, to transport their new Kajj (leader), Gonaid Fraxt, between the two planets. As part of this traditional ceremony, the vessel carrying the leader is "attacked by adversaries that he must overcome with his strength, bravery and wisdom." The planned battle is ceremonial in nature and amounts to another ship putting on a light show and fireworks.

When the time came for the ambush to occur, the crew of the Armstrong was surprised when phaser cannons on the Zsche vessel were activated, and several broadsides reduced the shield strength of the superior starship.

Captain Alia Soulstar, commanding the Armstrong, refused to fire and attempted to move the starship out of range. But the Zsche vessel's use of weapons it was not designed to deploy, caused its fusion power reactor to become unstable.

Soulstar contacted the attacking vessel advising them of their peril, but they refused to listen. When they attempted to strike the Federation ship again, their fusion reactor lost containment and vented into the centre of their ship, breaking it in two. A subsequent search found no survivors.

Kajj Gonaid Fraxt and his entourage were subsequently beamed down to Jin Prime. The Kajj claimed that a faction of local religious zealots staged the attack. But Federation sources say this explanation will not halt a full investigation into the incident. 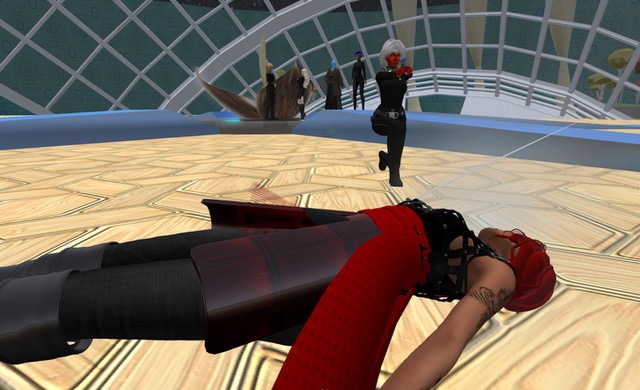 On a diplomatic visit to the capital city of Jin Prime, the bridge crew of the USS Armstrong was invited by the newly elected Kajj, Gonald Frazit, to attend his investiture.

The ceremonial event went off without a hitch until the Commander of the Kajj's guard pulled a sword and advanced on the Kajj. Chief Security Officer Dolfke Barbosa, concerned for the safety of the Yadhi leader, pulled her phaser, set to stun, and fired a single shot at Captain Esti. The female fell, and was subsequently examined by Chief Medical Officer Genny Markus, who pronounced the agent dead. Starfleet Intelligence Officer Kassi Quandrii noted the white-faced reaction of those on the dias, and moved to protect them while Fleet Captain Barbosa was questioned.

Due to the quick action of Commodore Markus, the cause of death was found to be a dart in Captain Esti's neck, which was already dissolving. The Starfleet Chief of Security was then exonerated, but questions remain as to who would have assassinated the Commander of the Kajj's guard, and for what purpose.