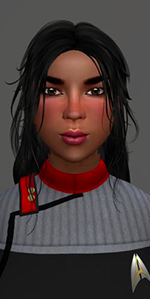 Ship operations are Wednesday evenings at 9PM SL Time (Yes, that sounds late).
We are particularly interested in West Coast USA and European UFS Members to join our ship.
The USS Caligula (NCC-81851) is is a Merian Class exploration vessel/light cruiser for the purpose of treaty enforcement, neutral zone border patrol, fleet operations support, diplomatic missions, and dispatches from HQ to investigate, intercept, and intervene in disputes/violations/infractions within the Federation.

We are looking for those who have some branch training, completed courses and RPs in their areas of interest, and are committed long-term to advancing through the Midshipmen and BBPC programs at the Academy. This is a new ship with opportunities to advance.

The ship us currently active.