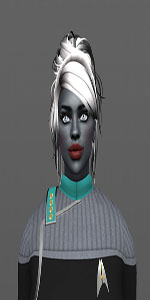 The Courageous has been sent to Mark 6.75.350 and on the way picked up a distress call. Upon getting closer to the origin of the distress call it was found that it was a message buoy.

On my scans of the region surrounding the bouy I found 2 M class planets at 7.65.220. We were currently too far away for me to detect anything in detailed scans.

The message from the bouy read, "Under attack by Bajoran Raiders. Losing power, looking for place to set down."

A discussion commenced on the bridge among the crew guessing on what and who Bajoran raiders would be after. But not much was found in the database pertaining to this.

Upon moving closer to the planetary system it was found to contain many planets but only the 2 M class planets previously found were capable of sustaining life.

My scans were more productive and I found a power source on the left side of the planet. It did not seem large enough to be a full size ship though. It had to be a shuttle or a drone. I continued my scans to see if I could get any more details.

The Captain ordered caution as we continued to approach to continue our investigation.