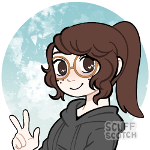 Fiona wandered the station, intent on setting up air monitors in the most commonly used areas. All in the name of finding out if there were any wild yeasts floating around the station, and if so, what they were. Already, she had scribbled together some paperwork explaining her hypothesis -- that wild yeasts could be carried from other places, even from Earth, on clothes or objects or even on people, and that it was possible for them to exist in the air aboard the station. The air monitors would, of course, keep their watch, and Fiona planned to check them later for results.

Heading down the corridor from the science deck to the turbolift, Fiona eyed the wall opposite the turbolift. Well, it was very probably going to be a commonly used area, she thought, and placed a monitor on the wall. A button on top activated it. At that moment, the turbolift pinged. Perhaps the turbolift might be worth including in the experiment?

Another air monitor was swiftly installed in the turbolift and activated.

'The Promenade, please,' said Fiona to the computer as the doors closed.

As a social area, it seemed the most likely place to get results from. The turbolift whooshed open at the Promenade. Fiona took in the scale of the area. She would probably need to place the monitors at regular distances to cover it all. Hopefully, the monitors would perform just as well even in such a large space.

She set to work. So long as she kept her pace regular and measured, the distances should be even...
Fiona Conn / Fiona DeCuir
Sent from my Linux Mint desktop