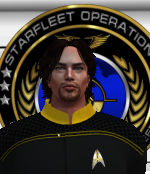 Being at my SS Peedy Thor Flight Controller position, everything was calm when suddenly a beep appeared in my screen, I identify "Here Enseign Silverfall from United Federation Starfleet on SS Peedy Thor" but no answer.

For many times, I asked the unidentified ship to identify itself as not getting an answer I informed my Commanding Officer "Commodore Kermie Mistwallow" who ordered me to launch the USS Cormorant and the USS Leonardo their asking to go to the coordinates of the non-identifying ship.

During this time I continued to send messages to try to identify the ship.

by the time the USS Cormorant arrived close enough to open fire, I received an understandable message "Here the USS Monarch do not fire, Do not fire". so I inform USS Cormorant to stay in Stand-by.

Captain T'sar explained to me that he had something installed on the hull of his ship that made them to our eyes as hostile ship. Then she asked me permission to start approaching the SS Peedy Thor.

I authorized the USS Monarch to start his approach and declare Blue Alarm and begin the approach procedure. The USS Monarch was placed on the repair dock to be repaired after its long journey.

Ensign Chedy Artis medic officer, Commodore Emilie Chardin and my self went to meet members of USS Monarch and wished them "Welcome Home".