Responsible for gathering intelligence, they have the patience to read through a database for hours on end, and the cunning to coax information from an unwilling giver.
Post Reply
7 posts • Page 1 of 1

For those wishing to go above and beyond thier duty stations and to take part in a continuing Adventure. UF Starfleet Intelligence is hosting an away mission to conduct research and data gathering.

These types of missions are usually undercover, however this first mission we undertake allows us the freedom of interaction and Starfleet representation.

I look forward to the participation.

Starfleet Intelligence has tasked us with cataloging an M Class Planet near the Pinastri System. The Planet is rich in flora and an ideal location for Rest and relaxation.

We are to assess the area, catalog anything we see including, Species, technology level, threats, flora, fauna etc.

On Stardate 170917 UFS Intelligence embarked upon a scouting mission to the Enchanted Isle. With seven officers present we landed at approximatly 16:00 Hours Standard Local Time (SLT).

We landed in an area that was surrounded by water and water features including a waterfall, caves and alot of flora. In the immediate area where abandoned stone carvings covered in moss, this would suggest a settlement had been here previously however and long since been abandoned.

Sending teams in different directions to cover more ground a building associated with an old earthen castle was seen in the distance, this would be the rendezvous point for the mission conclusion.

Alot of the area was covered with trees and flowers akin to that of earth, this could suggest an atmosphere similar if not identical to that of Earth itself, however a deeper scan from a starship would be needed to establish this fact.

Atmosphere was breathable therefore no EVA or breathing aparatus was required for the away team from the initial beam in.

Located a few kilometers from the beam in point was a structure similar to that of a windmill, this suggests some agriculture had been performed in the area at some point in its history.

Most of the planet has been covered in flora and seemed to of been abandoned, when or why is unclear.

During the debreif of the mission, Cadet Jordan recollected that there may of been some hallucinogenic properties in the area causing discomfort. This will have to be analyzed by science and medical before and future incursions.

It was noted by Lieutenant (JG) Reah that the castle had similar properties to that of earthen fantasy novel "Beauty and the Beast" which falls in line with observations of Fairies akin to that of "Peter Pan".

It is possible that the area was constructed with these fables in mind, wether this was part of an intended operation or as Cadet Jordan pointed out hallucinations was this just all in our mind?

These questions bring up concern and at this point until establishments can be made of what the planets purpose is and what atmospheric properties are in form until further notice we are quarantining the area for future research.

Major General Constantine brought along a holocamera and logged the area for historical records as indicated below. 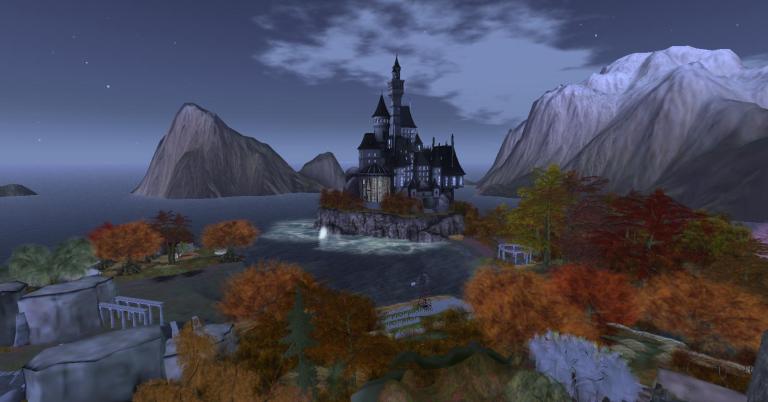 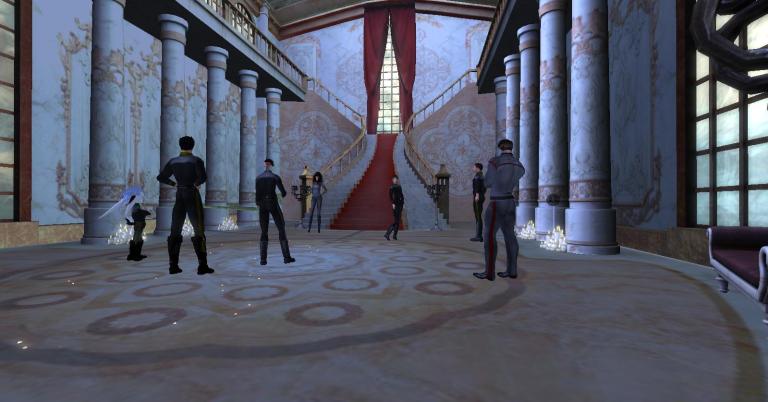 In conclusion, the area was a beautiful place with alot of possibilities for future exploration.

((A special thank you to Seline Fleury, the owner of the sim for allowing us to participate in the area))
Admiral
Deputy Commander in Chief
Top

The beamin point was a pool surrounded on three sides by rock cliffs with several waterfalls creating a pool of water and open to the south. At the north end of the pool, water flows from a high sculpture resembling an upturned, open human hand. Near the southern end of the pool, a line of paired columns stretches across the opening, broken in the center, with toppled columns lying in the water. Near the northeast and northwest corners, there were roughly square openings cut through the cliffs.

Through the northeast opening, a rock path leads to the east along the south bank of a river. Approximately 30 meters east there is a small inlet with some lighted candles in the water. No idea what the purpose could be but I did not disturb them since they may have been part of some tribal ritual. Around 40 meters in there is a beach with white sand. About 60 meters east is an object that appeared to be a two-person bed, with sheets, pillows, and an open book written in some unrecognizable language. The bed was covered by an open, lighted framework. About 70 meters east there is a raised rock formation with a flat top that would make a good lookout spot. Around 75 meters east is a white rock raised above the water with a small open platform on it, and a sign written in English that says "Every once in awhile, in the middle of ordinary life, Love gives you a Fairytale." Vegetation in the northeast area appears to be Earth-normal trees, grass, and bushes with the exception of one tree similar to a weeping willow that had trailing, luminous branches.

Through the northwest opening, a path heads west through an open archway covered with what appears to be multicolored moss. 30 meters west is a sculpture of the word "LOVE," with the letter "O" replaced by a heart. 40 meters west is a small open plaza area surrounded by archways.

Around 50 meters south of the line of columns, a windmill stands in a field of what appear to be sunflowers. The windmill has a blanket and pillows on the bottom of the frame.

On the way back to the rendezvous point I passed what appeared to be two naked human females. They did not speak to me, and I did not stop to speak with them. Without a tricorder I was unable to positively determine whether they were real or psychic projections. I recommend caution for any future survey parties.

I remembered after I posted this I needed to give my report to the captain.
Top

With this being my first report. I am not sure what all to report.

A small team assembled in the pinistari colony. We got a quick briefing about what we will find.

We left and made it to the planet. Captain Mistwallow had us split up and collect data.

Things I noted.
1. It seems to be a pre warp planet.
2. There was some very basic techonlogy.
3. As I wandered about I ran into what appeared to be tunnel entrances. I entered and explored about 20 feet then left the tunnel.
4. I also noticed it appears to be safe for Trills