Wow, it's been almost a month! Time flies when you're transferred to the far side of the galaxy!

With the restructuring at Pinastri Colony/Tranquillity Station, it seemed the right time for me to apply for a transfer: the Intel Division on the SS Astraios in the Gamma Quadrant is seriously short-handed (well, I'm short, and I've got hands - because right now I *am* the Intel Division!), and it seemed like a great opportunity for responsibility.

I arrived just in time for the change of command ceremony, which was an honor to witness. The new CO and XO took me under their wings right away, which was fantastic.

I've cross-trained on the bridge systems of the USS Armstrong, as a saftety and professional development issue: there's going to be plenty of Intelligence work to keep me busy at my own duty station, though!

We just re-launched yesterday, and we've ended up in the thick of a diplomatic crisis already. I hate to sound gleeful about planetary cultural upheaval, but they need me here, and I'm busy. It's paradise. 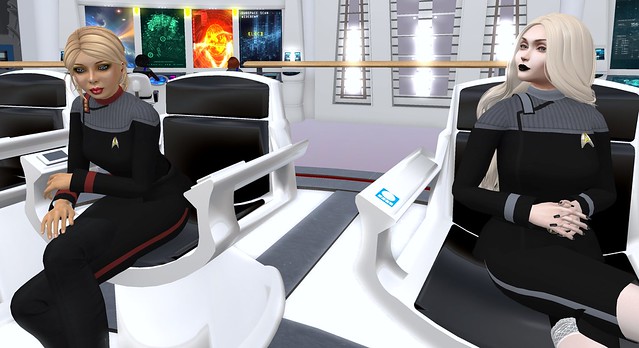 Assuming of course I don't trigger an interstellar war....

The Armstrong was attacked! We were hit hard by a little warp one putt-putt that should've only had navaigational lasers, but was packing a hell of a punch. Commander Soulstar had shields up, which turned out to be an incredibly wise precaution, though we were only expecting a "symbolic attack" as part of a cultural ritual. We wouldn't be here if she hadn't been prepared.

I didn't see that coming. I have to say, *nobody* saw that coming. We knew the Yahdi had purchased secondhand warp-capable ships, but all our xenological and intelligence data just said, "new civilization meets someone without a Prime Directive," but nothing that could remotely be a threat to us.

Commander Soulstar wants a report, and she's going to get the best report I can give her. Which, since we have NO DATA, is basicallly going to say, "We have no data. Intelligence [that's me] recommends we get some."

I went to school for that. Bow before my well-honed reasoning.

Did I mention I don't like getting caught with my pants down, even if nobody had their pants up? That metaphor went to a strange place. Anyway. I'm determined to be useful, and to, you know, *help keep us alive out here.* 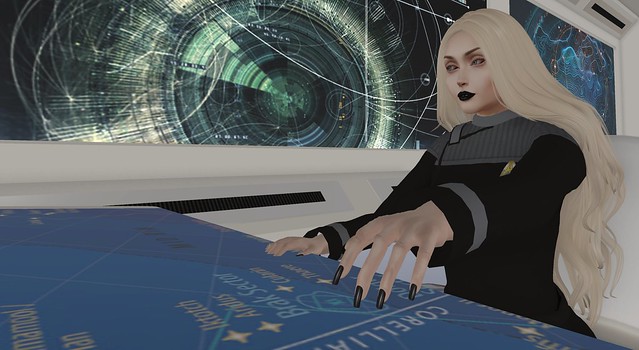 More coffee, back to work.

I am exhausted. Thankfully, I’m out of the shower and wrapped in my favorite robe – I could barely stand the smell of myself.

I commanded my first away mission today! And almost nobody got killed.

Almost nobody: as I’d feared, and advised Commander Soulstar, there was another attack on the Kajj. I leaped at him, but thankfully I didn’t have to take a sword to the neck for him: Dolfke shot the assassin before any damage could be done. She didn’t kill her though: there’s a Mysterious Assailant on the loose, who took her out with a poison dart.

Our AAR was well-received: the XO asked some hard questions and pushed me on my analysis, which I’m really glad of. She keeps me on my toes. Dolfke and Genny complimented my performance, which was an amazing gift from such experienced veterans. Commander Soulstar was pleased with my performance and my report, and endorsed my requests for further intelligence work among the Yadhi.

Right, right, I didn’t. But I keep seeing the glint of a spotlight off the assassin’s blade as she charged the Kajj – and honestly, I don’t remember a thing out of the next two minutes or so, just stepping out of the way so Dr. Marcus could examine him. And then my training kicked in, and I ran an interrogation, while little chibi-me was running around in my head shrieking and flailing.

I just put my Intelligence Branch Certification diploma out in my quarters. I think it may have stopped a crisis today.

If it could just stop me from shaking…
Top

No, Computer, that’s not the Kreetassan ritual challenge to a dance-off, that’s the cry of uncaffeinated Ensigns. 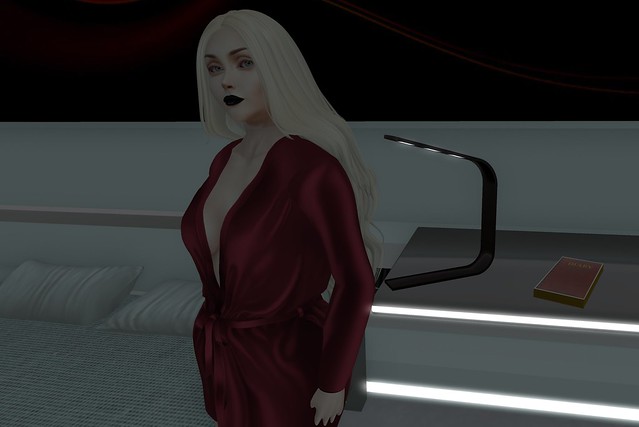 We’ve been so busy I completely failed to notice my one-month anniversary in the Gamma Quadrant, earlier this week. That transfer request was the best decision I’ve ever made. Out here, I’m doing the work I was trained to do, all of it.

I’ve advised the Captain on issues that will set policy for the Federation. My recommendations helped prevent a planetary political upheaval. I almost got stabbed by an assassin, but was saved by the quick actions of a teammate. I interrogated a political figure in the middle of a crisis and collected valuable intel.

We’re on our way to a planet with the sneakiest and most convoluted politics, and I’ve gotten caught up on years of mission logs detailing our encounters with them. I cannot wait to meet their Queen.

And I adore my colleagues. I really am working with Starfleet’s Finest.

If we could just do something about the mornings…

a rustle of Tholian silk falling to the floor, the hiss of a sonic shower starting up

That mission is going to end up being taught at the Academy.

Well, Captain Soulstar’s side of it anyway – the less said about the cockup on the captured Treman ship, the better. At least as far as the survivors are concerned.

But the sheer elegance of the Captain’s deception! It had the bravado of a Kirk or a Garth of Izar, the irony of a Picard, the wit of a Riker.

It’s a textbook problem, right? How do you responsibly use an overwhelming tactical advantage, without creating a grand-strategic disadvantage for yourself?

So we’ve got these cultists in secondhand Warp Two ships, ready to go off and start murdering in the name of the Duck God or the Rabbit God or whatever. Sure, we could vaporize them. And fifty, a hundred years from now the Federation would reap the whirlwind. That’s how empires fall, when they become accustomed to using power arrogantly, against people with long memories: their grandchildren get even, brutally.

The captain rejected the Security Chief’s advice to step into that trap: instead, she set a trap herself baited with their arrogance: faked a surrender in the face of their bluster, got them to drop their shields to beam over boarding parties – and then EMP’d the whole squadron. And beamed out their warp capacitors, leaving them dead in space.

We’ll hand those over to the Yadhi government, which can go collect a bunch of perfectly usable ships.

Commander Roffo says radiation levels on the Treman ship are back to normal after the cleanup. We’re going to strip that thing bare: I need to get into their data banks, and one of the ensigns had an idea that might enable us to trace their weapons suppliers.

And on the bright side, we managed to not quite kill the two most influential members of the Yadhi and touch off an interplanetary civil war. 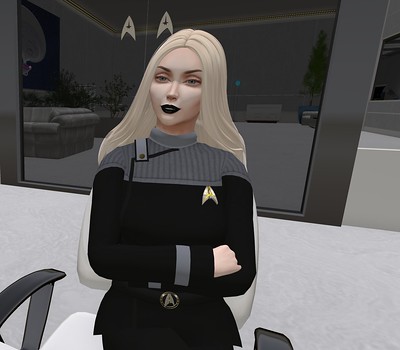 That is the face of one happy intelligence officer!

This time the away team did a by-the-book search of the captured Treman vessel.

The boffins managed to not get themselves blown up by the antipersonnel bomb (“Oh what a fascinating biological specimen! Note how toxic it is! And such an ingenious dispersal mechanism, that could fatally infect all of us in 3.72 minutes!”), so there’s that.

One of the new Science Ensigns, T’Mari, did a brilliant job decrypting and stripping the ship’s computer: that haul will keep the Intel staff back on the SS Astraios busy for weeks. Right off, it netted us confirmations of our key hypotheses: that the JHalidex are the weapons suppliers to the Treman, and that the Treman Navigators Guild is acting as retailers for them.

Science Chief Roffo confirmed that we can trace the dilithium from the Zsche mine to any ships carrying it or using it: I think our chances of that leading us on the trail of the JHalidex suppliers are low, but it’s the only lead on them we’ve got.

Captain Soulstar contrived for us to get requests from both the Treman and Yadhi governments to go investigate the mine, and wants me to lead one of the away teams. My taste in fieldwork runs more to dance clubs than dilithium mines, but I’m eager to get the first look at the situation down there.

Now, which end of the phaser gets pointed towards the bad guys?

So yeah, we beamed into an ambush.

Good thing Security was wearing their Prototype Lepton-Optimized Tactical (PLOT) armor, or we’d have been wiped out.

(I ducked behind a rock: give me the low-tech solutions any time) 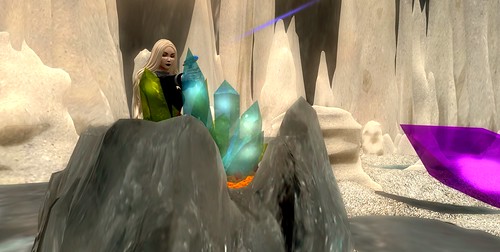 duck and cover by Kassi Quandrii

As it was, Chief Barbosa and Ensign Underall did succeed in taking down the mine supervisor and guard, after a chase through the complex.

The Captain’s half of the away team collected the scientific data we needed, and I found and rescued the sole surviving member of the Treman crew. He told us the rest had died in a recent explosion, he thought due to inadequate safety protocols. He himself had been blinded in the blast.

We got him out of there and departed without further incident.