It was a momentous day for the crew of the SS Astraios. Our ten-year-old NPC ship, the USS Neil Armstrong, has been retired. Its worn blue carpets and pre-mesh construction are now relegated to the history books. Thanks to the efforts of master builder Alia Soulstar and talented civilian engineer Han BoShi, a new Neil Armstrong has rolled out of drydock to take its place. The new ship is constructed 100% from mesh, and has state-of-the-art bridge consoles and advanced sickbay capabilities; a turbo lift that glides at an angle and an integrated ship's computer.

Some of the features of the new Neil Armstrong:
- Most used functions for Helm, Ops, and Tactical are available as console buttons (not menus). Lesser used functions continue to be available by touching the console.
- 20 character voices, allowing the mission runner to speak as 20 preconfigured or on-the-fly characters (e.g. Astraios Flight Ops)
- Crew activity is displayed and integrated with the main viewscreen
- Prebuilt library of stellar objects, ships, and NPC characters
- Tactical systems require target acquisition and weapons lock before phasers and torpedoes can be fired.
- Shield strength drops under fire, and can be reinforced with auxiliary power at the mission runner's discretion
- Fully functional med beds in sickbay to diagnose crew conditions and pull real-time data from the ship's computer

The first order of business was to report to the new bridge where Alia Soulstar had each crew member take a turn at the new consoles, explaining their operations, and then having the crew demonstrate their proficiency. This was done to ensure all crew is able to cover key positions as the mission and attendance required.

Once bridge orientation was completed the crew was transported to the main simulator building at Astraios colony. The simulator allows good and bad role play to be demonstrated for training purposes and as part of an ongoing effort by the CO and XO to raise the overall quality of Astraios roleplay. It uses a full set of "server-side" NPC avatars that are cloned from actual avatars. This server-side NPC capability is unique to Opensim, providing a range of advanced possibilities not offered by SL bots. Alia started by using the control console to populate the bridge with a full crew, then the simulation started with the crew executing a simple role play that contained elements of both satisfactory and poor roleplay. It should be noted that the simulator can be "programmed" using a simple notecard and it is available for any UFS members to use who have a hypergrid account.

The real crew then adjourned to the adjacent classroom where acting XO Ellemir Maven provided a class and discussion on effective role-play, highlighting where the simulation we watched differed from "best practices". The class focused on the five best practices for effective roleplay, and the crew had a lively discussion.

The session ended with a crew able to effectively operate the new Neil Armstrong who had an improved understanding of the level of role-play expected by the Command staff. 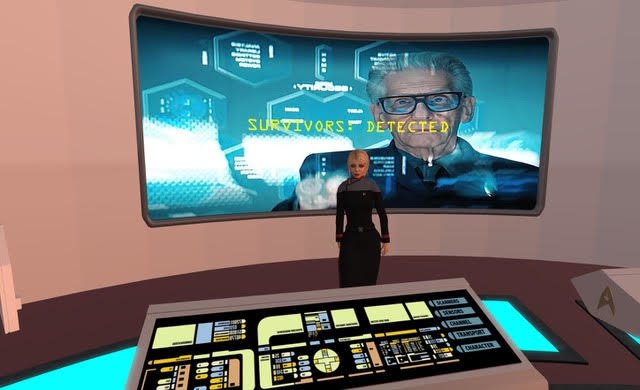 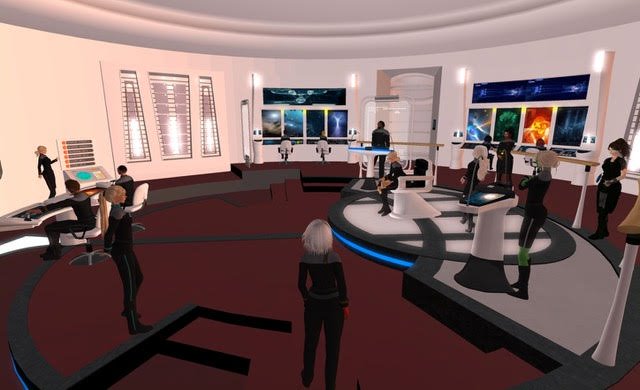