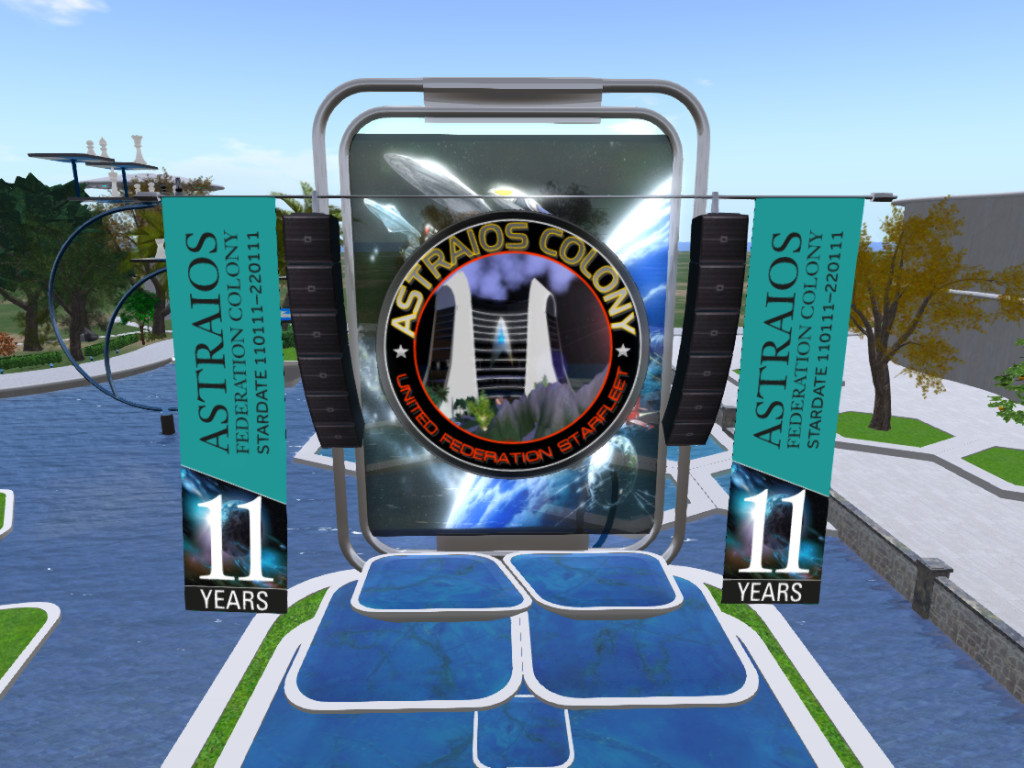 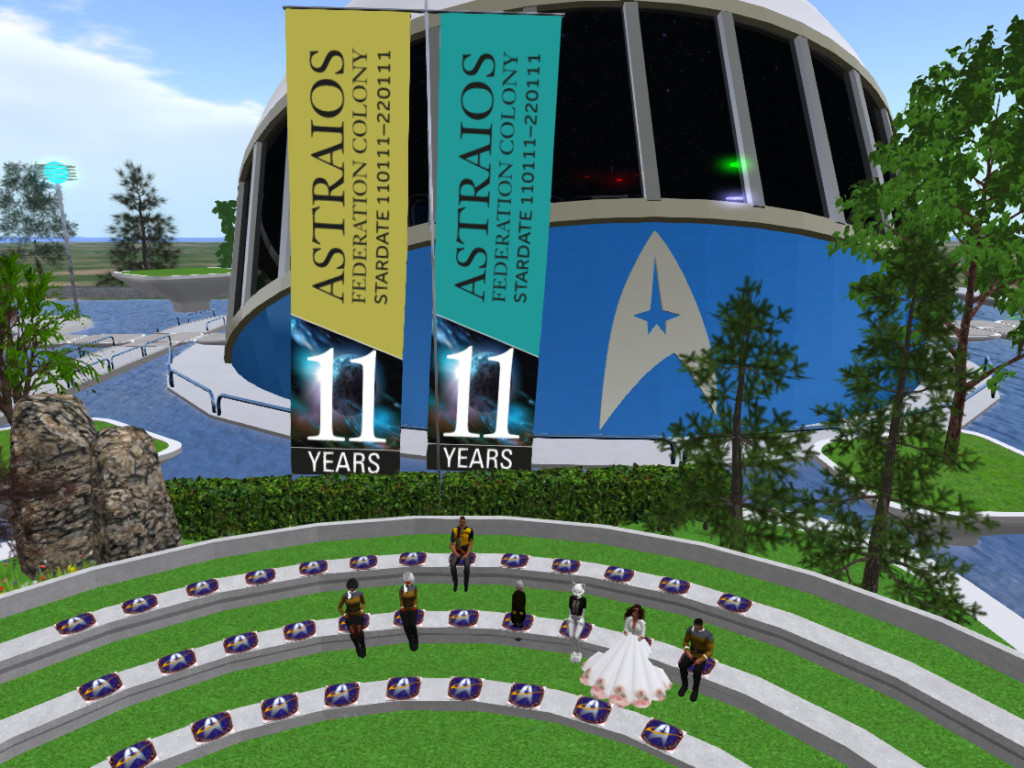 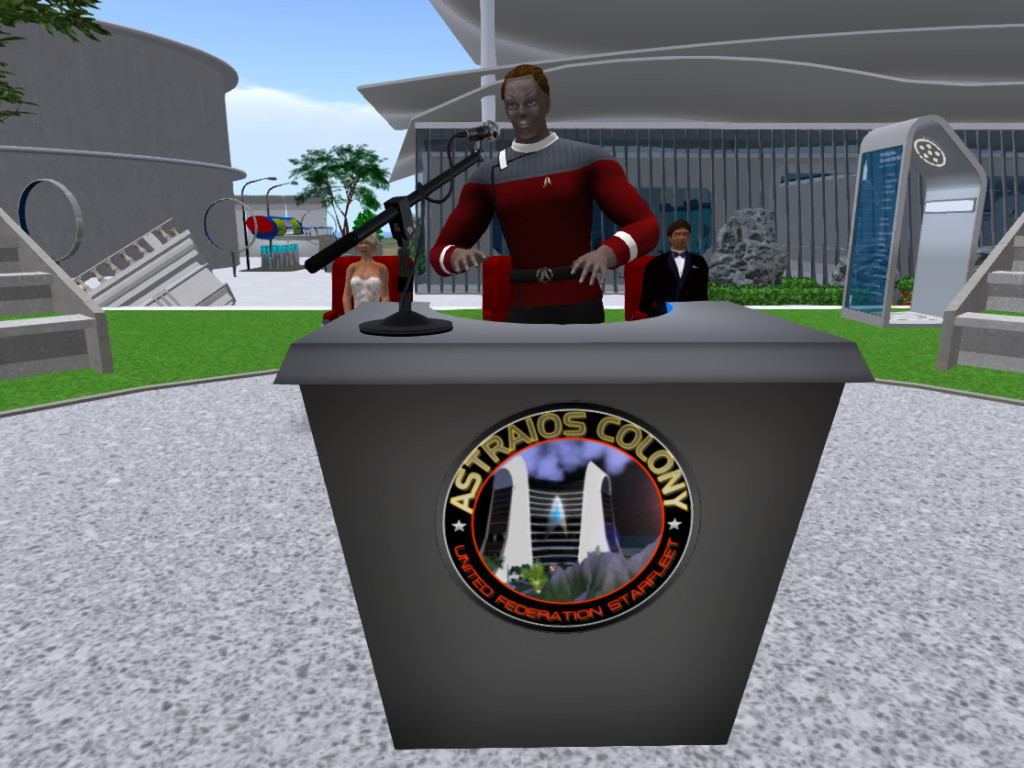 At the start of a Ceremony held in the Amphitheatre, Capt Kem Vala welcomed everyone saying that UFS Astraios Colony had been on 3rd Rock Grid for the past 11 years. He went on to say that over the past year a very capable crew had been assembled which had elevated the missions.
Capt Vala then surprised  Ambassador Genny7 Markus by inviting her to say a few words of her time as a Starfleet Officer. 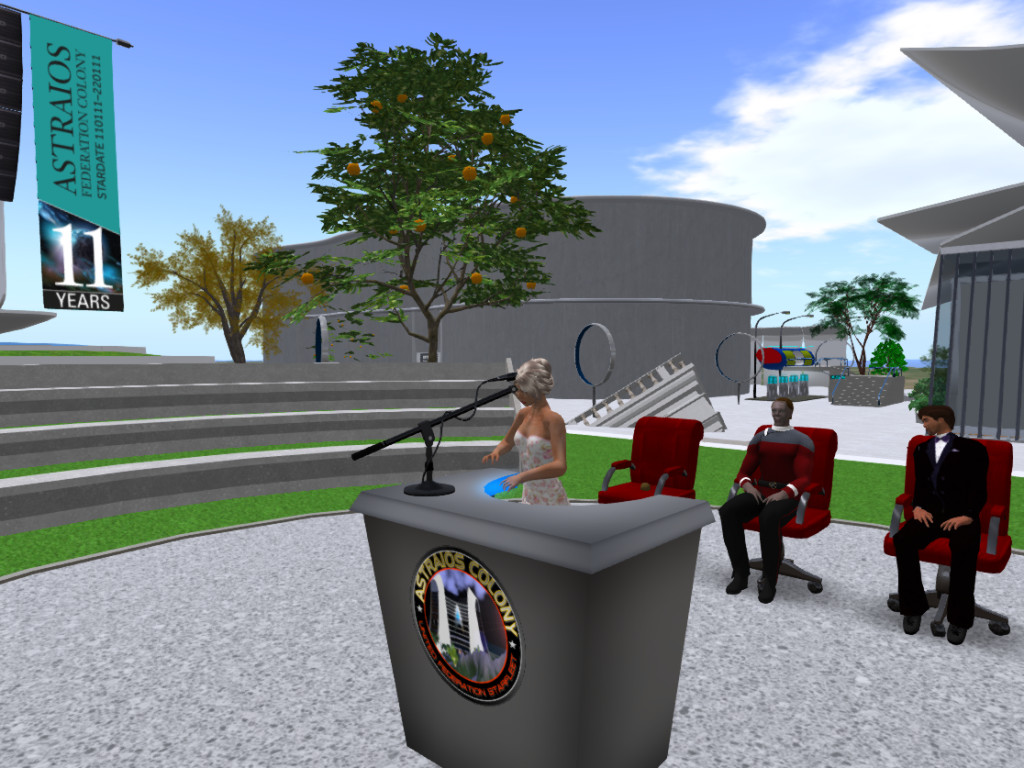 Ambassador Markus explained that for a number of years she been Vice Admiral Poison Toocool's First Officer - during which time they had become great friends. She also referred to earlier times when there were only four Starfleet Officers regularly attending missions aboard the USS Faithful - who then became known as the "Faithful Four".
Ambassador Markus then surprised Ambassador David7 Bravin to take the podium. 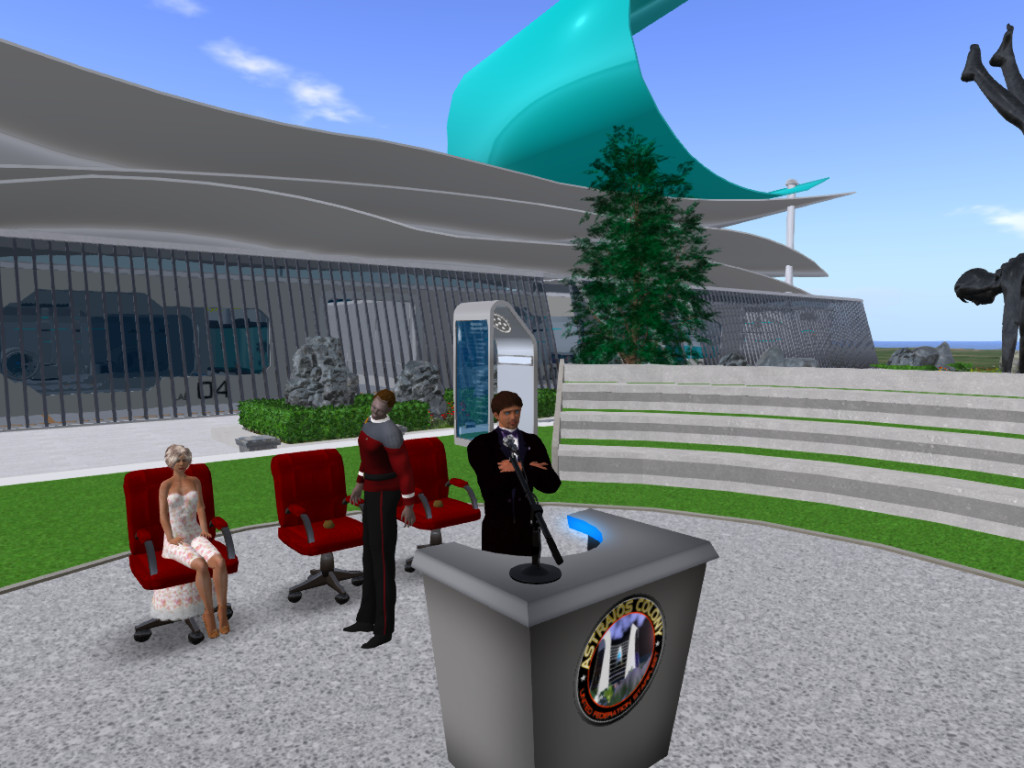 Ambassador Bravin started by referring to the small group of Starfleet Officers who left UFS Pinastri and came to 3rd Rock Grid on stardate 110111 to start a new UFS Colony. At the time everyone on Pinastri thought that the new colony was a waste of time and doomed to fail - especially as shortly after arriving the Commanding Officer of Astraios Colony departed. Fortunately, although she was only an Ensign at the time, Poison Toocool took up the challenge. It was only due to the hard work of Ensign Toocool and those other pioneer members of the crew that Astraios Colony and SS Astraios came about - to wish they have our grateful thanks.
Ambassador Bravin went on to say that Astraios Colony grew and grew and spawned a number of other Ships of the Line, which subsequently left Astraios to establish other Starfleet Colonies on other Grids. However they never lasted the test of time, leaving  Astraios as the only UFS Colony outside of Pinastri.
On leaving Astraios, Poison Toocool passed Command of SS Astraios to Genny7 Markus and Command of UFS Astraios Colony to David7 Bravin, who between them managed to keep the Colony and Ship going for the best part of 5 years, before passing Command to Capt Kem Vala.
Ambassador Bravin said that he and Genny7 Markus had been pleased to watch Astraios continue to grow and thanked LtCmdr Alia Soulstar for all the new building she had done on Astraios.
With that Ambassador Bravin handed the podium back to Capt Vala.

Capt Kem Vala thanked both Ambassadors Markus and Bravin for what they had said and for the examples they had set and mentoring they had provided to him.
He went on to thank the dedication of both past and present crew of SS Astraios - and was looking forward to being able to say "make it so" for another exciting year. 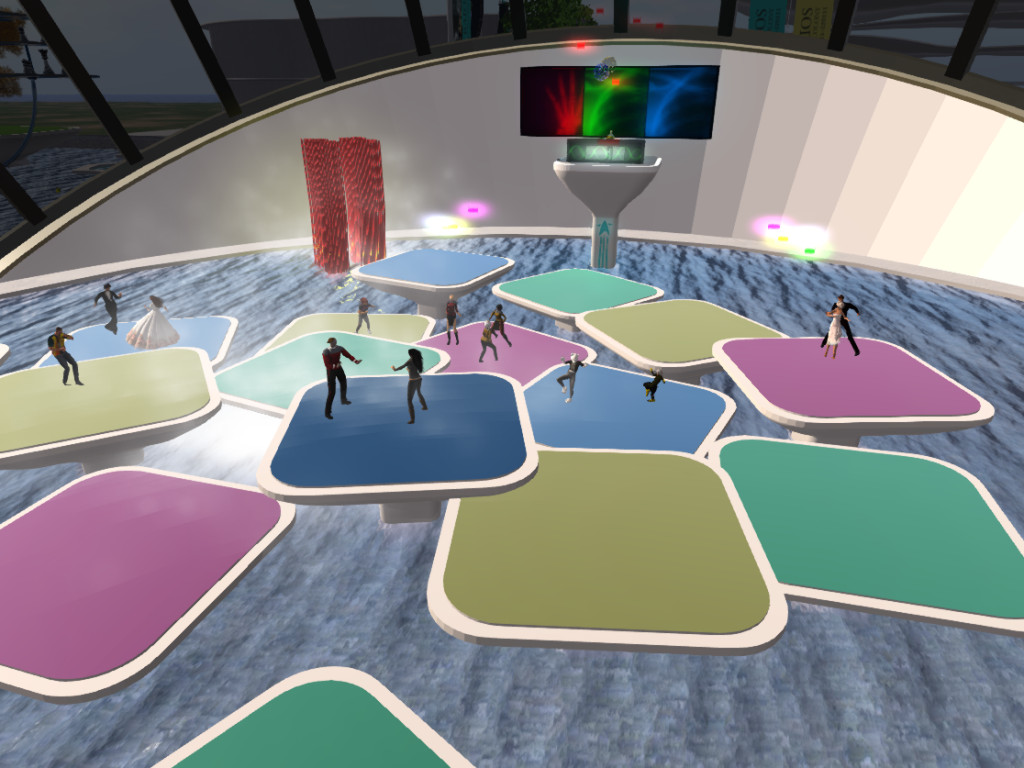 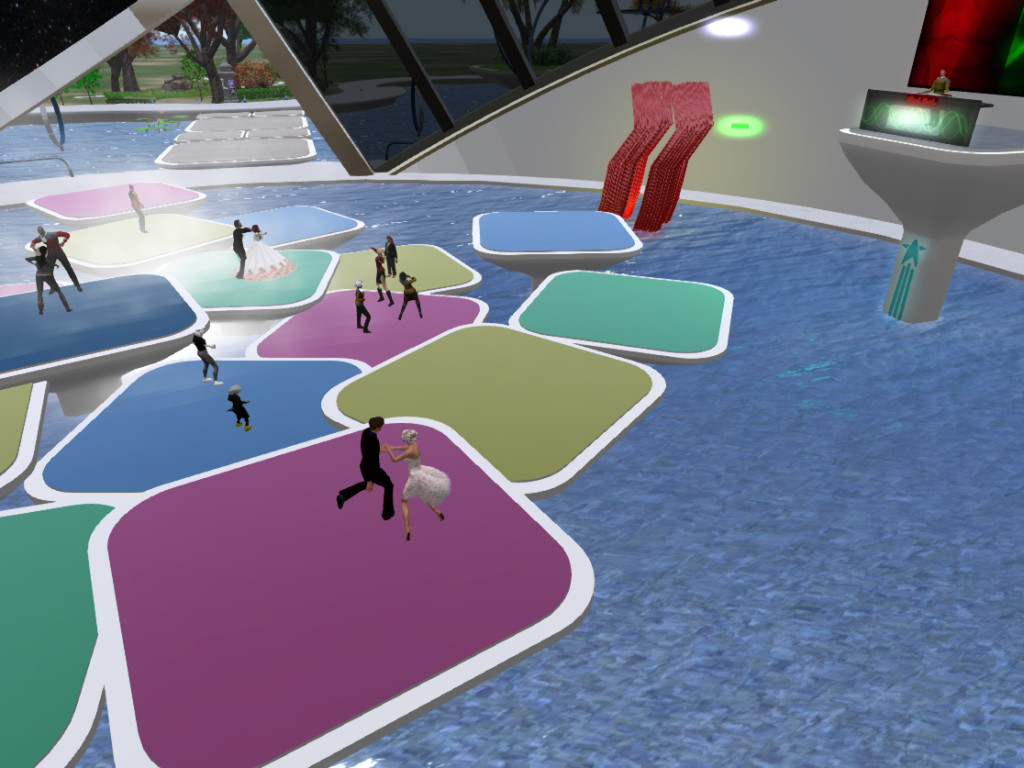 Everyone then went to the nearby Shooting Star Club for a dance to celebrate the colony's 11th Anniversary. 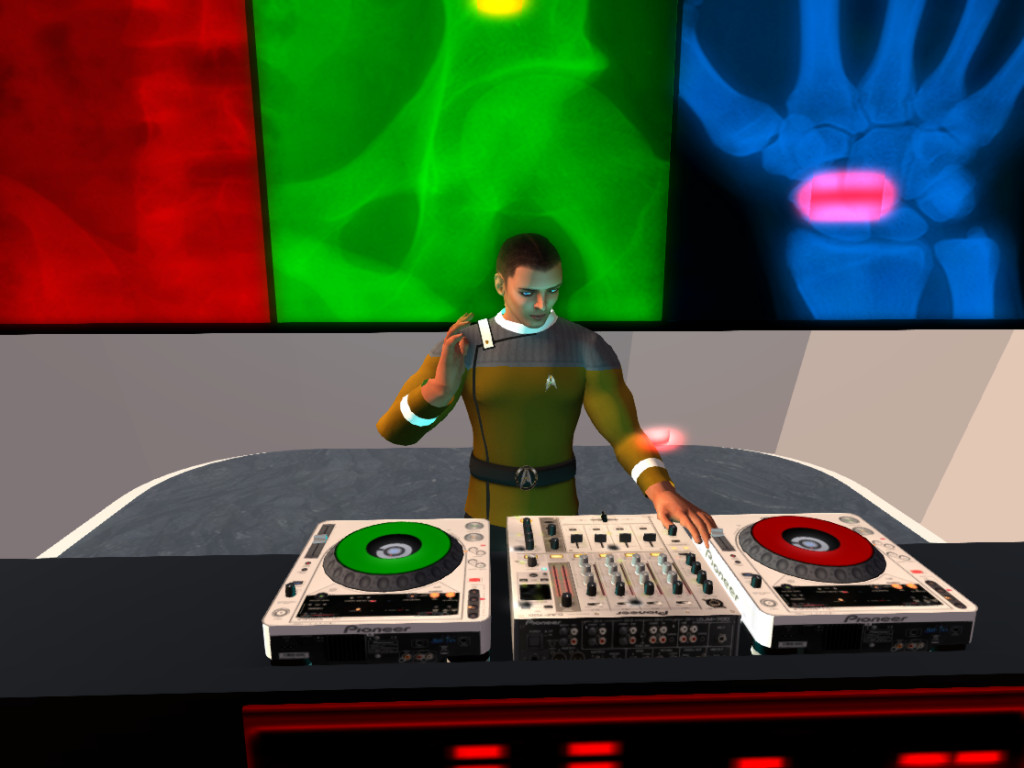 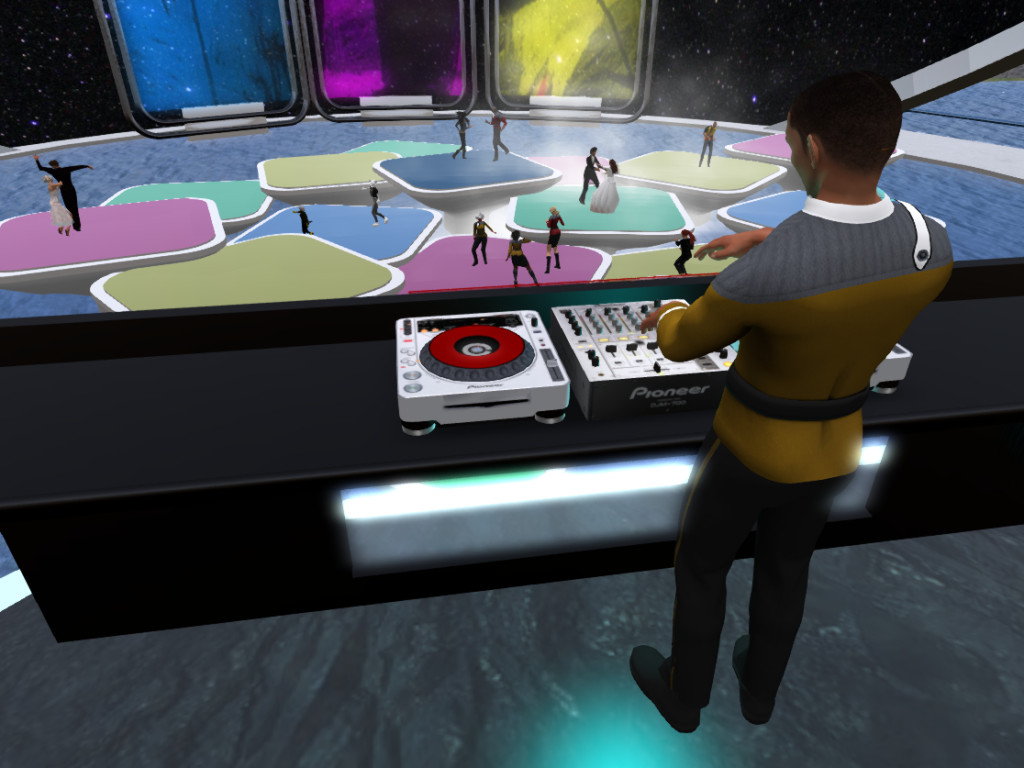 Lt Michel Farrell was the DJ for the event and played a selection of Star Trek themes and other music and songs for everyone to dance to.
Top
Locked
1 post • Page 1 of 1