On Sunday 12th January (stardate 200112) a Ceremony was held in the History Building on Majel region of Astraios Colony, to mark the 9th Anniversary of the establishment of the Starfleet Colony on Astraios Prime in the Gamma Quadrant (3rd Rock Grid).
The Ceremony was attended by visiting Admirals MilesPrower Dagger, Cheryl Skinstad and Poison Toocool, as well as officers from SS Astraios. 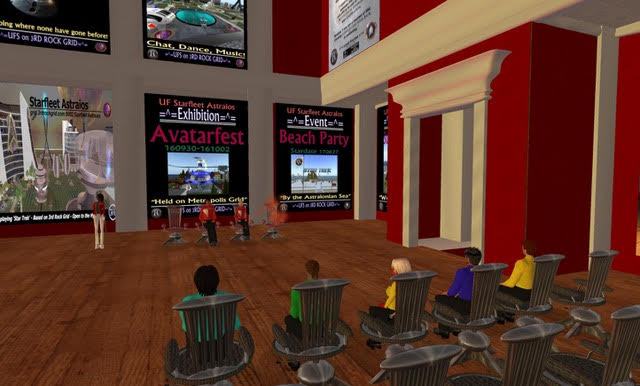 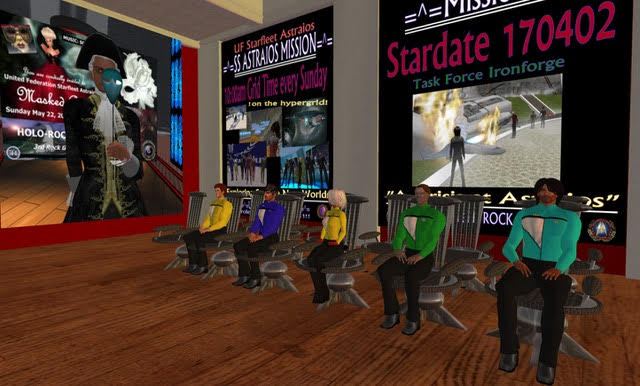 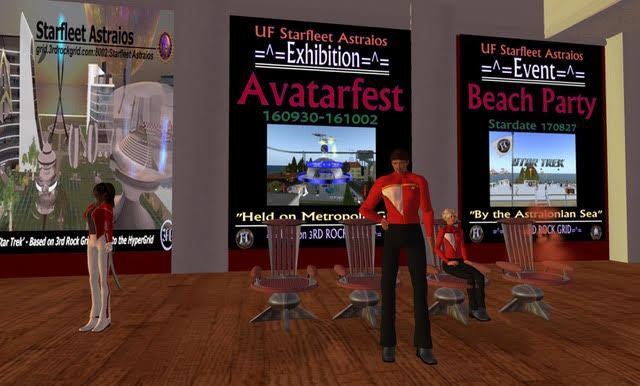 Having welcomed everyone, Commodore David7 Bravin went on to say -
"We are gathered here today to mark the 9th Anniversary of the founding of UFS Astraios Colony, here on Astraios Prime in the Gamma Quadrant (3rd Rock Grid).
By way of a change in venue from previous years, we are meeting in the History Building, here on Majel region. The History Building is not only an appropriate meeting place for talking about the past history of Astraios Colony, but also because it was built last year by the former Colony Commander, Rear Admiral Poison Toocool - for which we thank her". 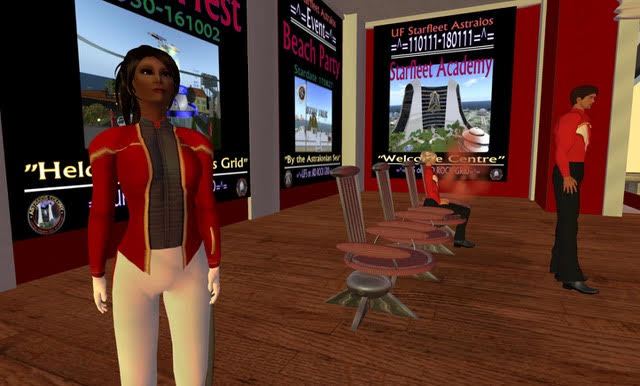 "So getting back to Astraios Colony's history.....
On stardate 110111 a small group of dedicated Starfleet Officers travelled from UFS Pinastri Colony in the Delta Quadrant (SL) to Astraios Prime in Sector G-009D of the Gamma Quadrant (3RG). Their task was to establish a permanent Starfleet Colony on Astraios Prime with the aim of 'broadening horizons' in the Gamma Quadrant. However they were not expected to be any more successful than an earlier attempt to establish a base that had be made less than a year earlier.
The long journey to the Gamma Quadrant was made in the knowledge that many Starfleet Officers on Pinastri disagreed with the decision to embark on such venture. It was thought that sending part of the fleet into the Gamma Quadrant would be dividing Starfleet's strength. They felt the crews, ships, engineers and supplies could be better used in the Delta Quadrant, as Pinastri had after all, only been established a few short years earlier. But, whether it was prudent or not, the decision was made, personnel were chosen or volunteered and the journey began.
Thus from the outset, there was a feeling that perhaps one day the 'colonists' would have to return to Pinastri and be met with a chorus of "We told you so !" and "What a waste of resources !". That would surely have been the case, if it wasn't for a young Ensign Poison Toocool, who took over command of the Colony within a couple of months after they had arrived on Astraios Prime.
Faced with not only the daunting task of establishing the Colony, the remaining Starfleet Officers had to contend with things disappearing, then reappearing a day or two later - a phenomenon later referred to as the "Astraios Effect". It was Colony Commander Toocool's shear determination to overcome the numerous problems that arose, that ensured the success of the venture and the Colony.
The Starfleet Astraios region was created on Astraios Prime and the necessary building work needed for the Colony began. The iconic Starfleet Welcome Centre and Academy Building was among the first to be built. This gave everyone a 'base of operations' and a place for an Academy where newly enrolled cadets were able to take lessons.
A state of the art space station, SS Astraios was built in high orbit above the Colony on Astraios Prime. The space station became the home base of Starfleet operations in the Gamma Quadrant.
Over the following years UFS Astraios Colony grew and prospered. The Colony not only grew in physical size to have some 12 joined up Starfleet regions, but also in the number of crew members.  Thus in addition to SS Astraios, two further Starfleet 'ships of the line' - namely the USS Davy Crockett and the USS Longtalker were established.
Eventually both the USS Davy Crockett and the USS Longtalker left Astraios Colony to set up Starfleet Colonies elsewhere in the Galaxy. ("New Vinland" on Digiworldz Grid and "Nyota" on Metropolis Grid respectively).
However before leaving Astraios aboard the USS Longtalker,  its Commanding Officer Fleet Captain Toocool, formally handed the command of Astraios Colony to myself and that of SS Astraios (to a then) Captain Genny7 Markus, on stardate 150913.

Over the past 4 years, Commodore Genny7 Markus and I have hopefully manged to continue in the footsteps of Rear Admiral Toocool  both in respect of Astraios Colony and SS Astraios.   With that in mind, I would like to hand over to Commodore Genny7 Markus to talk about what has been happening over the past year as regards Astraios Colony and SS Astraios"....... 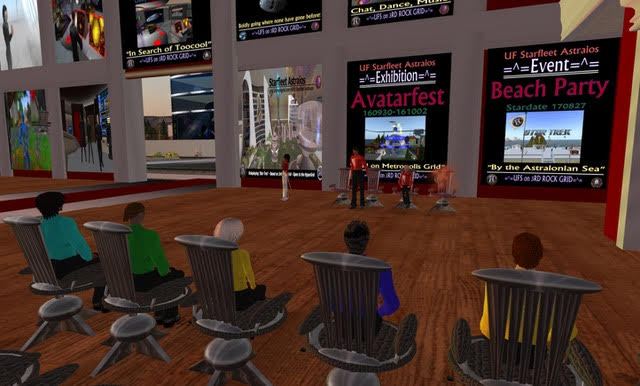 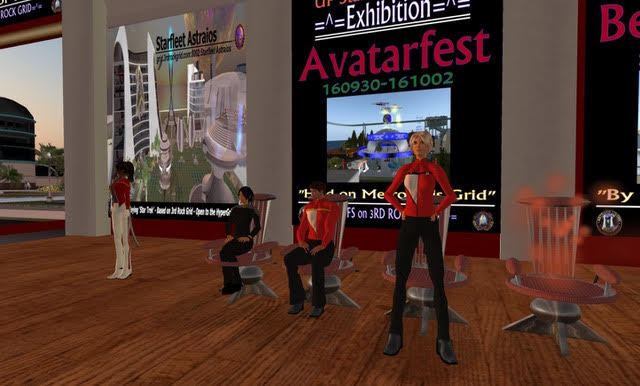 Commodore Genny7 Markus stood up and said ......
"Many of the Colony's long standing social events events, such the weekly Starfleet Boogie and the annual Beach Party and annual Christmas Dance continue to thrive. Being open to everyone on 3rd Rock Grid, these events are a way advertising Starfleet's presence on the Grid and thereby gaining new members.
We also continued to support 3rd Rock Grid's annual "No Borders" event, in aid of the charity Médecins Sans Frontières (Doctors Without Borders), at which we gave an illustrated presentation on 24th March about Starfleet on 3RG, which was attended by visitors from other Grids as well as those from 3RG.
Our weekly Sunday Missions continued throughout the year, which started with our participation in the Fleet-wide Task Force "Interphase" over 4 weeks - during which at times we role-played as our "other-selves" as being members of the Terran Empire !
Later in the year we participated in another Fleet-wide Task Force called "Phoenix" over a 6 week period - during which at times we had fun role-playing as Romulans in the Delta Quadrant (SL).
Another series of missions that were different to the norm during the year, involved us visiting and role-playing with members of the Dawn Foundation (a Star Trek Group) on Discovery Grid.
Earlier, Commodore Bravin referred to members of the Astraios crew. For if it wasn't for our crew - there would be no UFS Astraios.
So looking back over the past year ......
Unfortunately we lost a crew member - Captain Kirsty Tamae, who left Astraios and Starfleet due to personal RL issues.
Our Chief Medical Officer, Breydon Lane remains on an extended Leave of Absence - whilst serving on abroad in RL, but should hopefully return during this coming year.
We welcomed back Commander Morath Landfall, who returned from Medical Leave at the end of the year.
We also welcomed back Commander Astro Balut and Lieutenant Alia Soulstar, who both returned from a extended Leave of Absence in order to share the roles of Master Builder and Quartermaster - in place of Fleet Captain Karl Quar, with whom we have unfortunately lost contact (and fear the worst).
It is pleasing to report that Cmdr Balut and Lt  Soulstar have undertaken a complete rebuild of the surface of Starfleet Astraios region, which once completed, they will turn their attention to SS Astraios above.
It is also pleasing to report that during the past year we had several new members join us on Astraios, namely Lt(jg) Eboneezer Franklin, Ensign Ciena Wyllo, Ensign Rocky Devil, Ensign Cody Cooper and Cadet Rondo Catteneo.
Thus we now look forward to the year ahead.
So, let us continue exploring strange new worlds, seeking out new life and new civilisations - boldly going where no one has gone before, here in the Gamma Quadrant !" 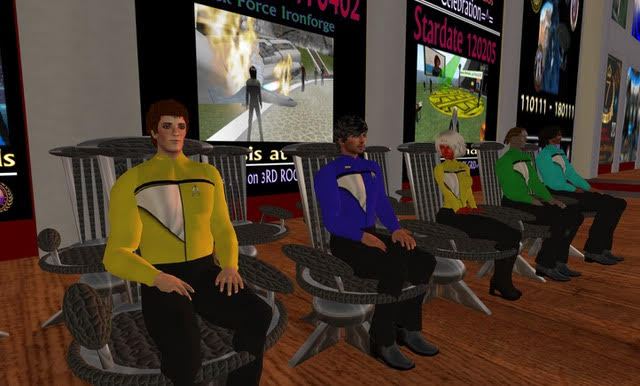 The Admirals were then invited to say a few words - 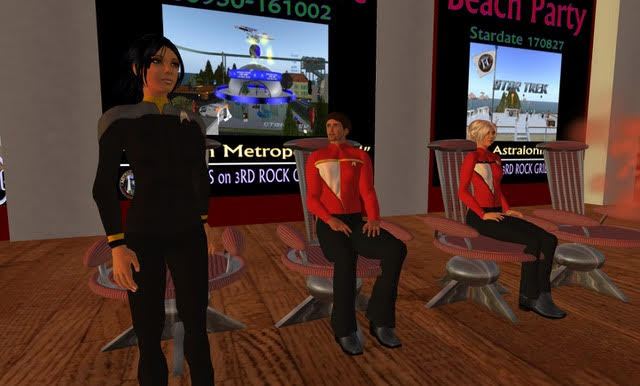 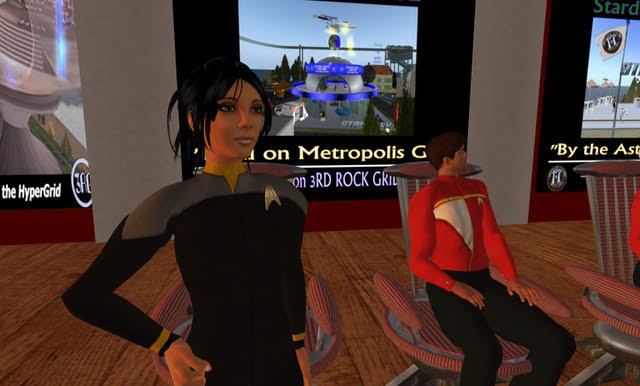 Rear Admiral Cheryl Skinstad stood up and said
"I would like to just say a few words if Admiral Dagger does not want to speak firstFirstly please excuse me not being in the correct uniform, I also apologise for being late,I got caught up in another meeting in RL
But let's think about the dates here that we are celebrating 110111 and now. Gosh that is amazing!
I have seen you all grow in confidence and your achievements have been extraordinary.
I love visiting here, I know I do not get over here very often, but when I do things are always moving forward.
You are constantly achieving over here, never standing still. I am in awe of you all and your efforts
I had a wonderful opportunity to RP with you last year You made me feel so welcome and part of the "Family"That is what makes you so special over here. You are such a tight group. You work well together and everyone is made to feel they have a role to play
Well done all of you. Here's to the next year and your achievements". 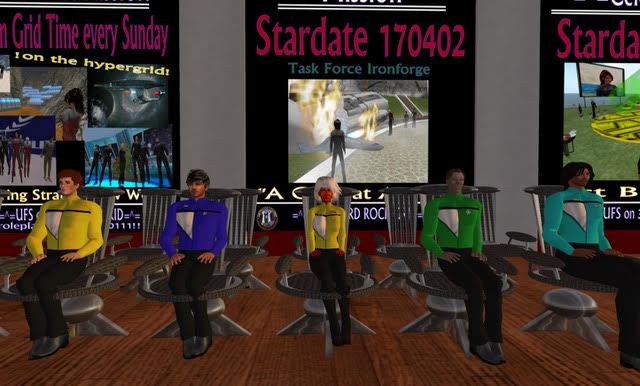 Admiral MilesPrower Dagger followed by saying -
" I don't have anything prepared sorry, I've been out of touch the last few months and was reminded of this the other  day. Also sorry for the appearance, I'm still trying to figure out this new viewer. I  will say its an amazing accomplishment what you have done here for 9 years. It's hard to believe it's been that long already. I can remember the meeting where Mike first announced the expansions. Astraios has been a shining example to all of UFS about having fun with their fandom, one I hope others will learn to emulate as we continue to grow and evolve as a community. Warp Speed ahead, Astraios Strong!"

Admirals MilesPrower Dagger and Cheryl Skinstad were both thanked for their kind words.
At the end of the Ceremony everyone was invited to beamed up to the Panoramic Lounge aboard SS Astraios for a celebratory drink. 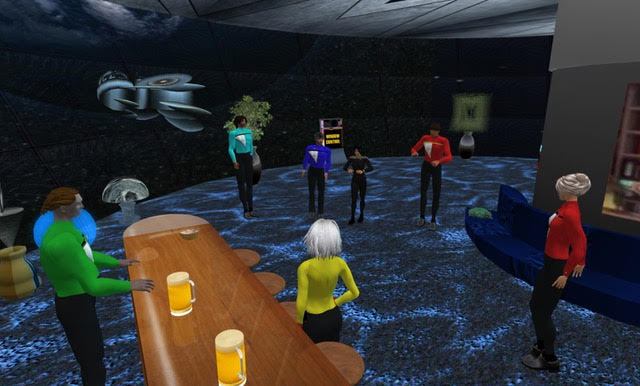 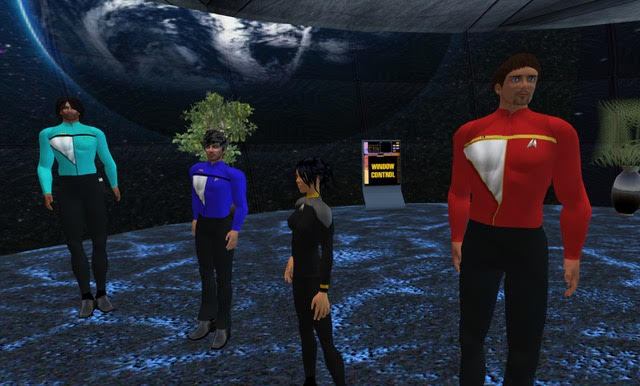 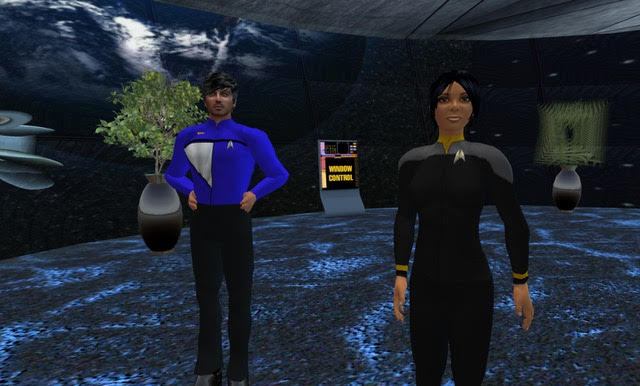 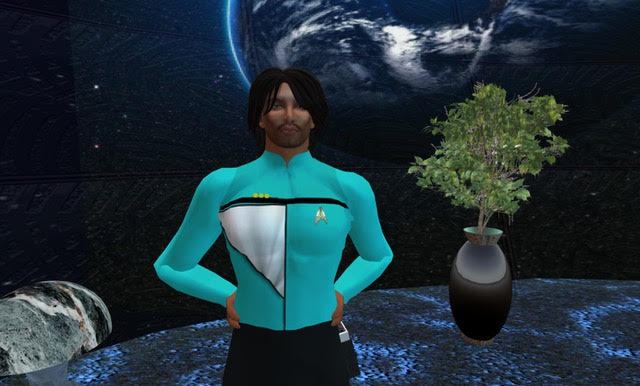 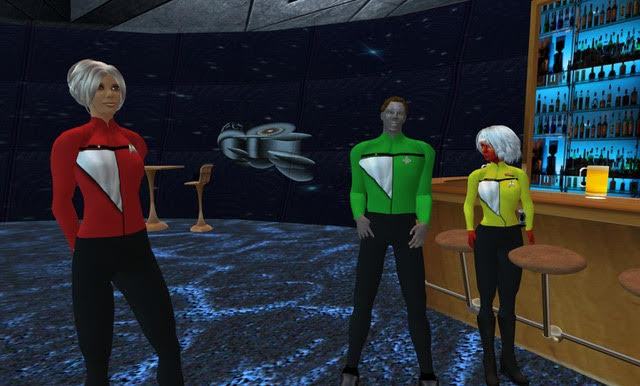 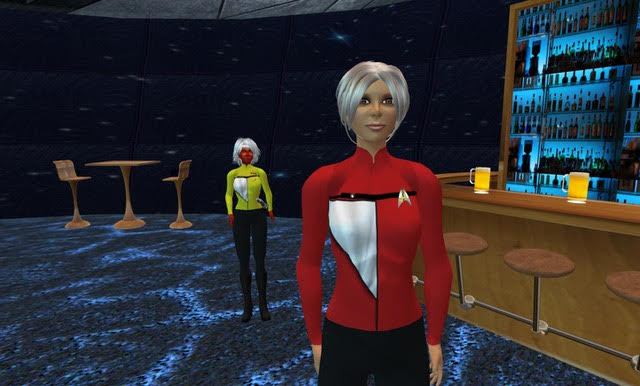 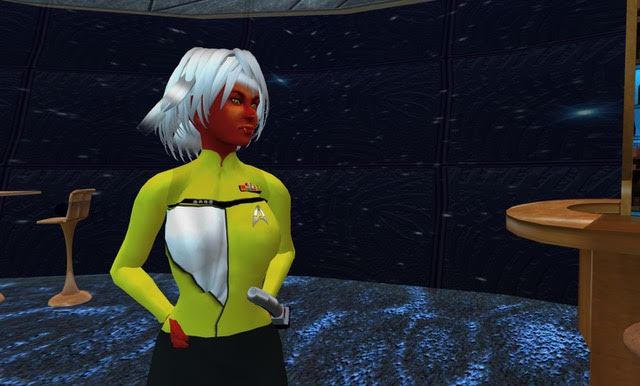