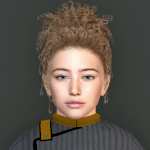 Foreword: This is a retrospective report, summarizing the events that took place from Stardate 220806 through 220911.

After having returned from my LOA I was informed that the Hemmer, a shuttle that underwent some repairs, and its crew went missing on a testflight. As I heard that Lt. Otsuka was on board, I volunteered to go on a search and rescue mission. Lt. Col. Mitchell and I were sent out with Shuttle 3 - La Forge. We headed to the Hemmer´s last known location. The tracking lead us to a nebula where, as the scans showed, an ion storm had occured in the past days. Concluding that this might have forced the shuttle to enter or pass the nebula, we calculated a possible route and entered the nebula. In the nebula we lost communication to the Durant, but as soon as we passed the nebula, we instantly recieved a signal of a Starfleet Emergency Transponder that lead us to a class M planet. Upon our arrival we were able to communicate with Lt. Otsuka, who reported that the Hemmer had performed an emergency landing on the surface and that two crewmembers, Ensigns Torak and Johnson, got injured, but her and Ensign Ellsworth were fine at that point.

Lt. Col. Mitchell and I safely arrived on the planet's surface where we found the wrecked Hemmer and our missing crewmembers who were accompanied by members of a native tribe. As a consequence of the emergency landing, they seemed to have made contact with an obviously pre-pre-pre-warp civilisation. Lt. Col. Mitchell waited in the La Forge while I left the shuttle to check on the shipwrecked crewmembers. Moments after we greeted Lt. Otsuka and Ensign Ellsworth, the latter was attacked and abducted by a flying dinosaur that flew the ensign up to the mountains. I tracked Ensign Ellsworth's combadge and was able to locate her, then followed Lt. Otsuka and the natives into a nearby cave where the injured ensigns were laid on flat rocks and got treated by a native woman. As any signal were blocked inside the cave I went back outside and informed Lt.Col. Mitchell, who was still in the La Forge, that the Ensign got abducted by a flying dinosaur-like animal and that she need to track and rescue Ensign Ellsworth. I tried to contact Ensign Ellsworth as well, but the signal was too disrupted. As Lt. Col. Mitchell went on a bird-hunt, I went back into the cave.

In the caves, Lt. Otsuka must have had activated the EMH after no other medical personnel was present anymore. As the EMH treated the unconscious ensigns, I was informed that the radiation in the cave is hazardous and all crewmembers had received an inoculation before, so I as well received one by the EMH. All this action did not stay unnoticed by the natives, who were friendly and helpful. I was made aware of the possibility that the radiation could be a reason for the illness the natives were suffering from. A short discussion between Lt. Otsuka, the EMH and me came up, whether and how to help the natives or if this would be an indefendible violation of the Prime Directive. On my behalf, the discussion came to a quick stop as the EMH noticed a seizure on Ensign Torak and informed us about his critical condition. At that point I decided that both ensigns needed to be tranported back to the Durant immediately to receive medical treatment in sickbay.

I prepared the La Forge for an immediate departure and while doing so, I tried to contact Lt. Col. Mitchell and Ensign Ellsworth. No replies from neither one. But a scan for their combadges showed me strong vital signs on both and that they were getting close to each other. Right as I had the La Forge ready, Lt. Col. Mitchell came back safe with Ensign Ellsworth. As the EMH was still trying to stabilize Ensign Torak, Lt. Otsuka and I carried Ensign Johnson into the shuttle.

As the EMH had stabilized Ensign Torak, Lt. Otsuka and I carried him into the La Forge. Even though I avoided contact to the natives as mcuh as possible, one male had approached me and offered me a gift, a tooth of a dinosaur. Being in a hurry and just wanting to be polite I accepted it, but as it turned out, his intention was to make me his partner/mate/bride. I immediately returned his gift and focused on our departure.

As the two ensigns were secured in the rear of the shuttle along with the EMH I left the planet and headed home. While on our way, the EMH and I discussed our options and came to the conclusion that it would be best to contact the durant asap after passing the nebula and to make her head into our direction and beam the injured ensigns directly into sickbay.

After the ensigns were beamed off the La Forge I had a discussion with the restless EMH about my eating habits. I ended it by deactivating the EMH. While travelling back to the Durant I informed CO Captain Rieko about the events that took place on the planet and that we need to fly back to recover the Hemmer and of course bring home our crewmembers. At 2209132241 I returned safely to the Durant.

The Durant had reached the class M planet where the rest of our crew was waiting to get picked up. I flew down with two engineers who had to make the Hemmer work at least enough to bring it into orbit where the Durant was waiting. As soon as the Hemmer was able to lift off again we packed everything together and left the surface, making sure to leave without a trace except of the memories in the heads of the native tribe.