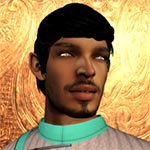 I read the briefing before breakfast and learned that we are ferrying two passengers on a top secret mission that will be revealed as time unfolds. I have met them both, they are very interesting and seem a good match pairing.

After a light breakfast I joined the crew on the bridge and scan who is on duty. The Captain was already there reading over the days’s itinerary and gave me a nod, and I returned the nod. We are learning to become a team much better week by week. Even though I have 27.45 % Human in my DNA makeup I don’t always understand his humour but I have watched many hours of Human video comedy and I have begun to understand his Human sense of humour and take it in stride now. I work at the best of my efficiency to be the most competent First Officer I can for him and work to anticipate his possible moves. Currently I can see he is nervous and concerned with this pacing across the bridge and slight distraction while thinking about the situation.


(Personal thoughts - Secretly my first love as they say, is sciences, I didn’t begin on a track for an Officers position but I am here doing a double duty you may say. I have studied physics and mathematics, biology, geology and mineralogy, and medicine with pharmacology. I find I strangely prefer biology and medicine and have an affinity for it, but I did not become a doctor but rather a science specialist. I felt my being in the Federation with the goal of being on a star ship, and being it’s doctor with so many non Vulcans may not be the best course for me, but then again could it have been? Perhaps I could look into a medical profession later in my lifetime back on Vulcan. I am the First Officer with a science back ground. They kept promoting me. I simply did my best at the tasks I had been assigned throughout my career so far.)

The bridge crew is efficient though I have some reservations about Ginrai. I asked him if he needed assistance and he did not answer me today. We are heading into a war zone of two planets, with an unknown ship currently appearing on our screen and we have no idea of it’s intent toward our ship. I know he has certain sensitive abilities, much like I do but I am concerned his may interfere with his duties. I have noted this and sent a short message to the Captain’s mail. I will speak to the acting Doctor on board about him and if we need to take any action at this time. I have confidence in all of the bridge crews’s abilities after reviewing their files when they first boarded the ship.

One exchange crew member however has caught my attention. The Romulan S’Lina. I have had enough experience and information with Romulans to have little trust in her at this time until she proves to me she is not secretly Tal Shiar or has any ulterior motives after reading her file and her family profile. I constantly scan the crew for their performances while on duty, My Vulcan ears are highly sensitive and I hear even the whispers between the crew members though they don’t realize it generally. I can also see with my 20/10 vision things happening and I noted today that S’Lina tried to distract Mr. Caproni with a teasing motion along her thigh, though he didn’t fall for her move to his credit. I may ask her to come to my office in the near future.

It is evening now and I need to work out in the gym, shower, conduct my meditation and get to sleep.
Top
Post Reply
1 post • Page 1 of 1