The USS Taylorholic Durant is considered to be the Flagship of the UFS Fleet. We are honoured to have Admiral Mike Calhoun as our former CO and as a current crew member, as well as other luminaries. We support UFSA as much as we can and we provide mentorship to the JOOP & CGSD graduate programs.
We roleplay in-world on a drop-in and scheduled basis. We also add to our history and environment by writing RP Narratives, Mission Logs & Personal Stories for the UFS forum.
Inspired by the ship's namesake, the late Admiral Taylorholic Durant, crew members work to exemplify the behaviour, actions & vision of United Federation Starfleet in everything they do. Our first rule: to be kind to one another. And have fun.
Please note we practice Post Order (P.O.) and One Post in our Roleplays. For further info, contact the C.O.! 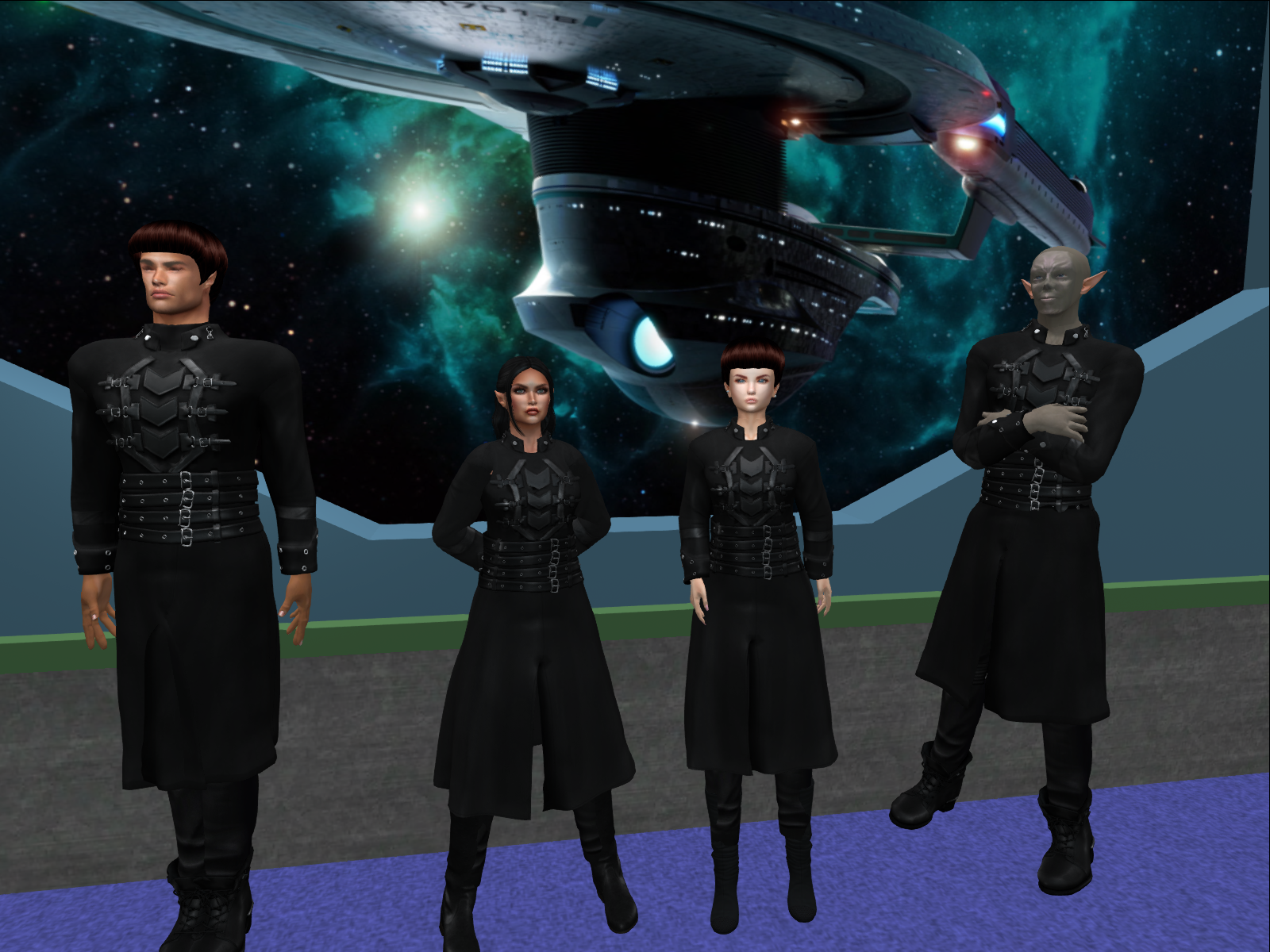 IRW Rarrait Sub Commander Sahi: looked around the bridge at the officers, The Tal Shiar had assembled the best of the higher-ranking officers. This ship the Warbird a part of the Imperial Romulan Fleet is in perfect condition, but she still decided to ask for reports. "Everyone Commander Sothila has been called back to Tal Shiar headquarters and I am in command of the Rarrait!" She looks around at the group... "We are here to kill or be killed..make no mistake about that. Reports everyone."

USS Sheppard CO Commodore Lombardia: (Reg.flips the comm panel. =/\=Lombardia to USS Aries, Cydonia and Courage. break from the main fleet and seek enemy ships. If located report back and try to lure them to us. Lombardia out. Good hunting.=/\=

IRW Rarrait Centurion Galan Solius stands at the Engineering console onboard IRW Rarrait. Fresh out of Engineering training school, he was familiar with most of the controls, but some were unfamiliar. "Engineering reports ready, Commander."

IRW Rarrait Major L'Ni reports as requested by the sub commander, “Tactical is performing at optimal efficiency Sub Commander Sahi, as I trust you will be in your new elevated temporary role. We don’t need the empire to find you wanting at all, I’m sure you will be efficient enough.” Flicks an eyebrow which in some circles could be interpreted as a smirk.

IRW Rarrait Sub Commander Sahi: "Good everyone," she looks at the newest officer Galan... "Centurion, you're new...welcome to the Rarrait. Tactical how many enemy ships do you scan? She turns to Major L'Ni and says "I demand respect or I will use a disrupter on you after your usefulness is fulfilled for this mission. We must succeed in bringing Starfleet down... destroy them!"

USS Veracruz CO Kinney Randt: (Reg.) Lt Salek, coordinate our position with the USS Sheppard. The goal is to create a zone between our two ships that the Romulan ships will be lead into.

IRW Rarrait Centurion Galan Solius looks over the console controls carefully. The D'deridex class heavy cruisers had not been covered in training specifically, but many of the controls were common to other Romulan starship classes. The cloak section of the console is what worries him. He had not been trained on the nullifier cores that mask the emissions of their quantum singularity. Their alignment is critical, and the Tal Shiar will literally have his head if the Federation ships are able to detect Rarrait due to his bungling. "Cloak and weapons are online, Commander, all systems nominal."

USS Sheppard T'Preea: (Reg.) =^= science personnel who is available help engineering to get the sensors operational

IRW Rarrait L'Ni taps at the console and lifts her head to report with a side glare at the new officer on the other console “Sub Commander, to be more precise, I see three Starfleet ships on long-range scanners” pauses as she clicks a few more times “There are no indications they are detecting us, course and alert status appear constant, our cloak is running perfectly. Scanning theses ‘ships’ for biological signatures of all known telepathic species now”

USS Sheppard Emerald Lombardia: (Reg.) sends a message to Dr. Johnson's PADD " Check to make sure everything is stocked completely, I have a feeling before this is over we will be needing everything we have"

USS Sheppard Ensign Nyxie: (Reg.) we can try to jam their lines of communication

USS Veracruz Kinney Randt: (Reg.) Contact the Sheppard. Between the two ships, we should be able to create a small jamming field, enough to prevent any Romulan that falls into our trap from reporting back

SS Peedy Thor Commodore Mistwallow: (Reg.) =^= HQ to Fleet, Comms are being jammed frequently, we have 12 ships decloaking at Pinastri, no make that 15, no wait =^= *comms cut off again*

IRW Rarrait Sub Commander Sahi stands, paces, and says, "three starships... this may be some type of trap they're trying to put into place. We have 30 ships... decloaking 15 of them. Let's decloak...we will be asking for the surrender of the 3 ships. Hail one of the ships. Report on the scans tactical... can you see the biology of the crews on those ships? Maybe some of our Vulcan cousins?"

IRW Rarrait Kem Vala: "Prepared to drop out of warp at your command, Commander."

IRW Rarrait Centurion Galan Solius carefully checks the power transfer section of the Engineering board. He is able to change power priorities on different systems. At least that's working well. The cloak section shows the system drawing minimal power now that they are decloaked, but the nullifier core section might as well be labeled in the Human language. He opens the panel's instruction manual on a side screen, hoping no one notices.[/b]

IRW Rarrait Major L'Ni looks up with hard expressionless stare at Kem “Subcommander do not waste time with this dyypan, there are three ships two Nova class and one defiant class, as yet no indications of any telepaths aboard but scans continuing to run”

USS Sheppard Commodore Lombardia: (Reg.) debates returning to Pinastri to assist in the defense but knows he'll just be bringing back even more Romulan ships at his heels.

IRW Rarrait Commander Sahi: "Report on the scans, Major, and open comms with one of the Starfleet ships!"

IRW Rarrait Major Vala: "My navigation sensors indicate there are more than 3 ships in the region, Commander... 10... 11 perhaps."

IRW Rarrait Centurion Galan Solius briefly looks over his shoulder at the Tal Shiar operative at the tactical console. She is not watching him, which is good. Reading the instruction manual, it is apparent that the section aligning the nullifier cores assumes that the operator has had years of experience in doing so. He begins to tremble slightly as the enormity of his fate becomes clear.

IRW Rarrait Major L'Ni looks over her shoulder and instinctively recognizes the signs of fear on the centurion and notes to pay him more attention. “Subcommander species scans complete the three ships do contain both Vulcan and Betazoid life forms”

USS Sheppard Commodore Lombardia: (Reg.) ***The three Federation ships move toward the rest of the fleet and scan to see if the Romulans took the bait.***

USS Sheppard Ensign Bebb: (Reg.) we are in the middle of the 3 ships the Veracruz is in front of us

IRW Rarrait Sub Commander Sahi: =/\= Sub Commander Sahi to the Romulan Imperial fleet ... Cmdr Sahi, here.. pursue the Starfleet ships... we want to keep the ships we have here... to the Commander of the Rikauni warbird, assemble 7 more warbirds and join the attack going on now at Pinastri, Sahi out =/\= She turns to her bridge crew, "Open a Comms channel to the starship Courage. =/\= Starship Courage .. we demand your surrender.. you are outnumbered. I will give you 3 minutes to give us your answer =/\=

USS Sheppard T'Preea: (Reg.) I do need to fight these feelings of anger towards these hostile Romulans it is not worthy of my time.. and very illogical

IRW Rarrait Major Vala: "The federation vessels are not changing course, Commander. I believe they have ignored your hail."

USS Sheppard McDunner: (Reg.) Ops try to see what you can do to scramble the Romulan comms.

IRW Rarrait Centurion Galan Solius checks the Engineering panel again, deciding to only adjust the parts with which he is familiar. "Ship is ready for combat, sir."

IRW Rarrait Major L'Ni closely monitors the targets as they approach “I do not know why they are acting so unafraid they are woefully outnumbered outgunned and out positioned! They must surely surrender it’s the only logical choice !”

USS Veracruz Lei Hanfoi: (Reg.) Sir, I believe the Romulans are scanning the fleet to see how many we are

USS Shepard Commodore Lombardia: (Reg.) ***The USS Courage responds =A=Romulan Vessels. You are trespassing in Federation space and will vacate immediately. Your presence here is an act of war. If you leave now we can send representatives to a neutral location and discuss your grievance. If you continue to pursue then we will have no choice but to defend ourselves. =/\=
Cmdr. Evelyn Rieko
Executive Officer | USS Taylorholic Durant
Squadron Mentor | UFSA Halley Squadron
Director | UFSA Activities 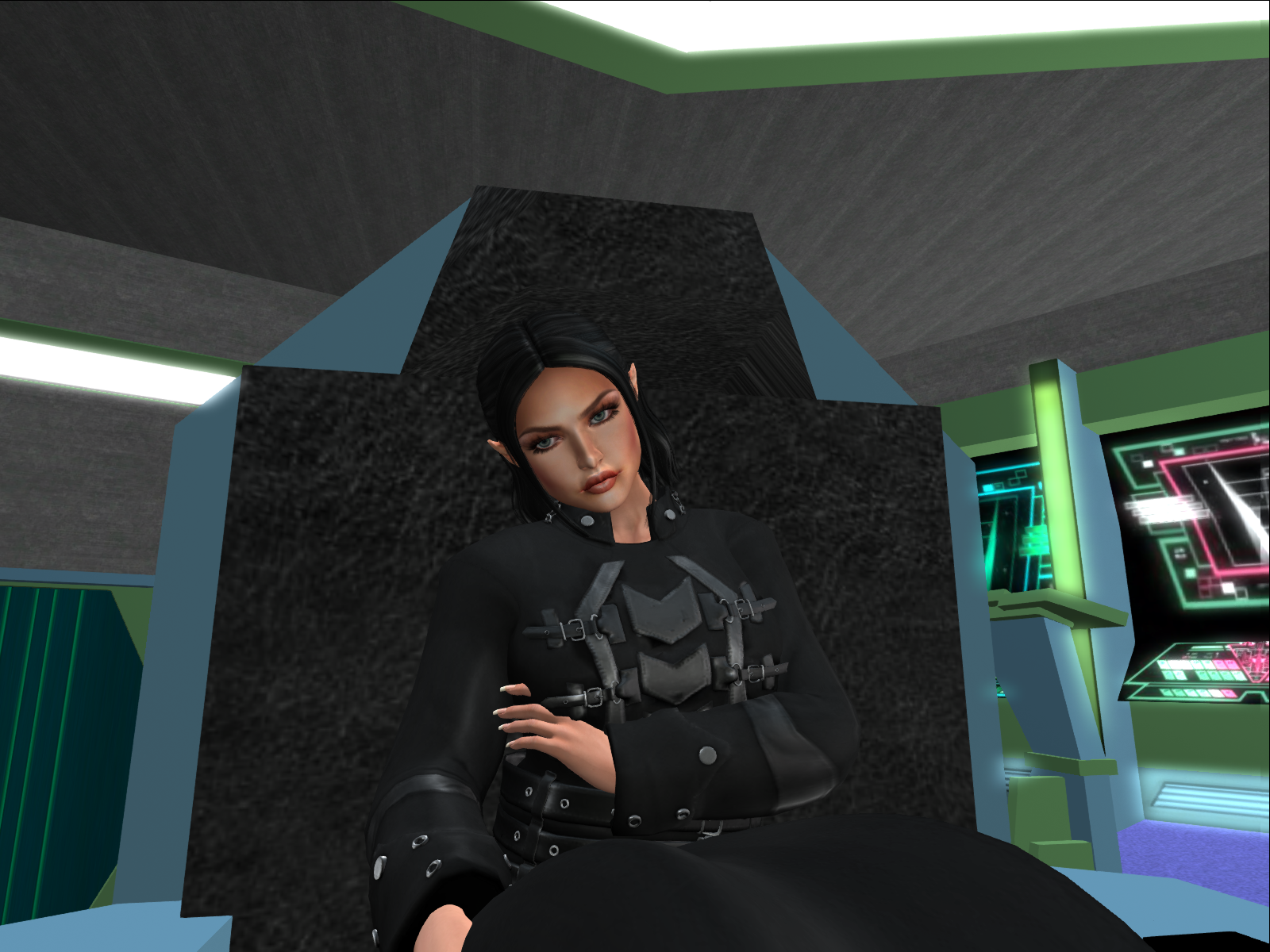 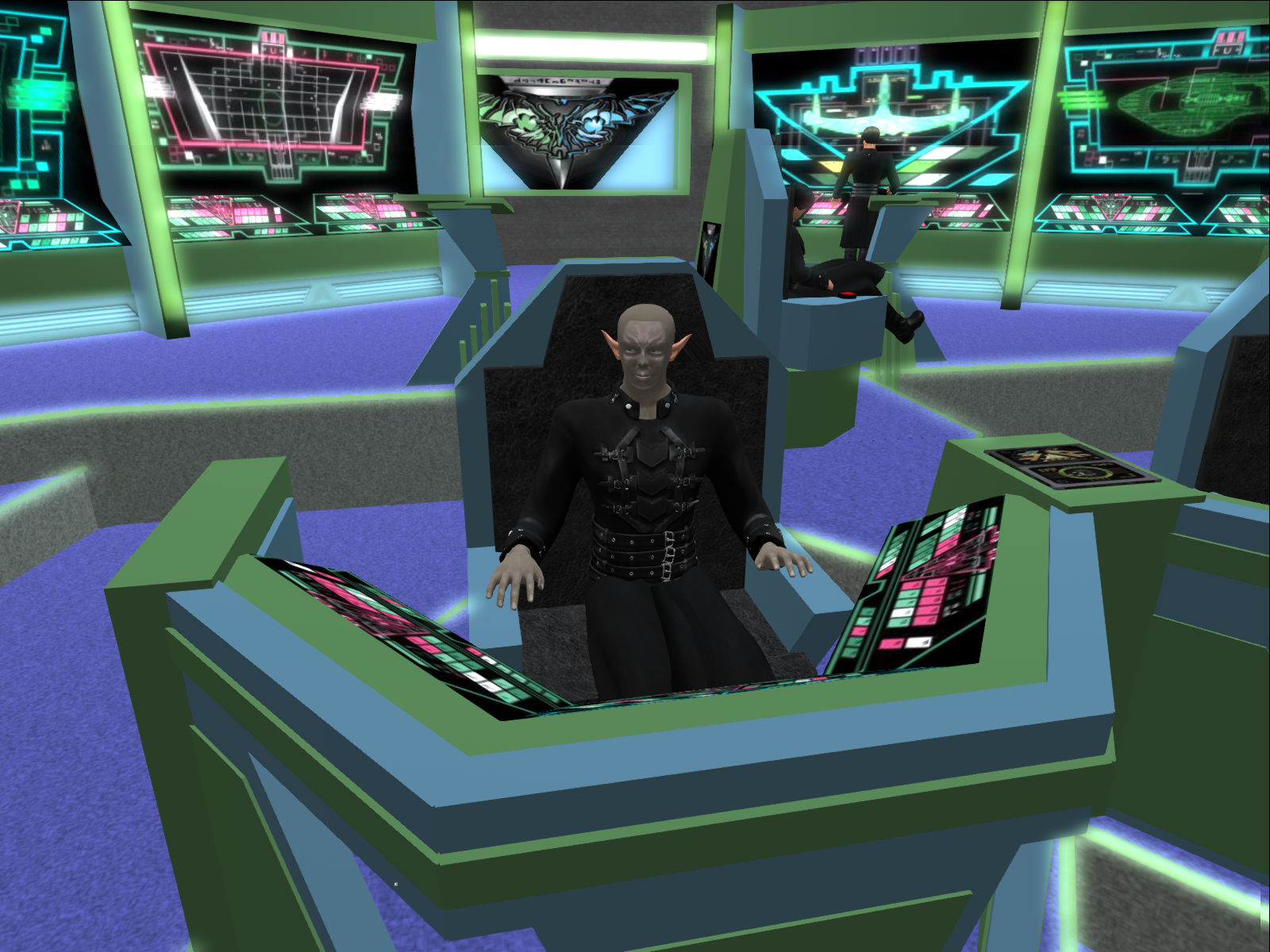 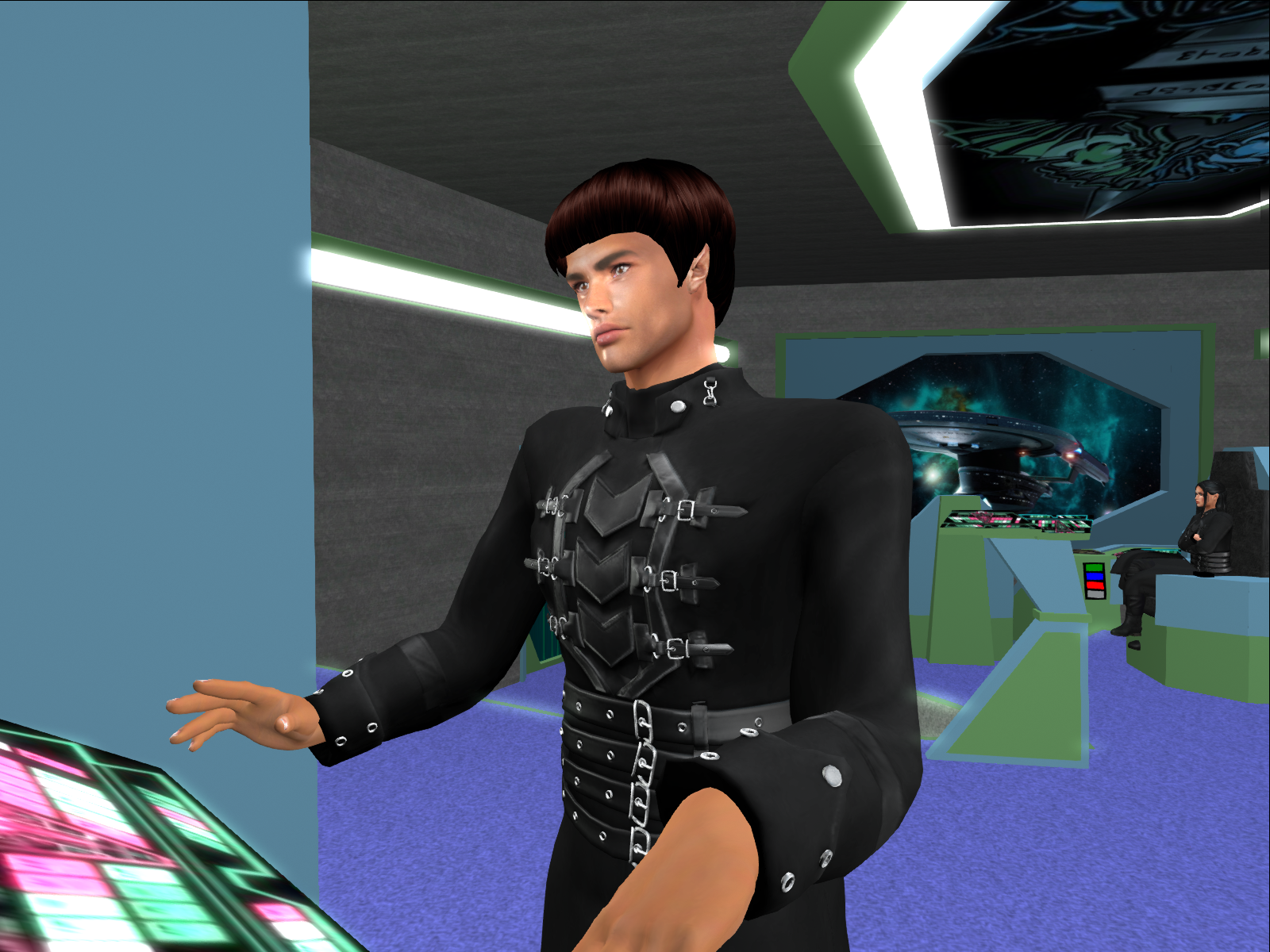 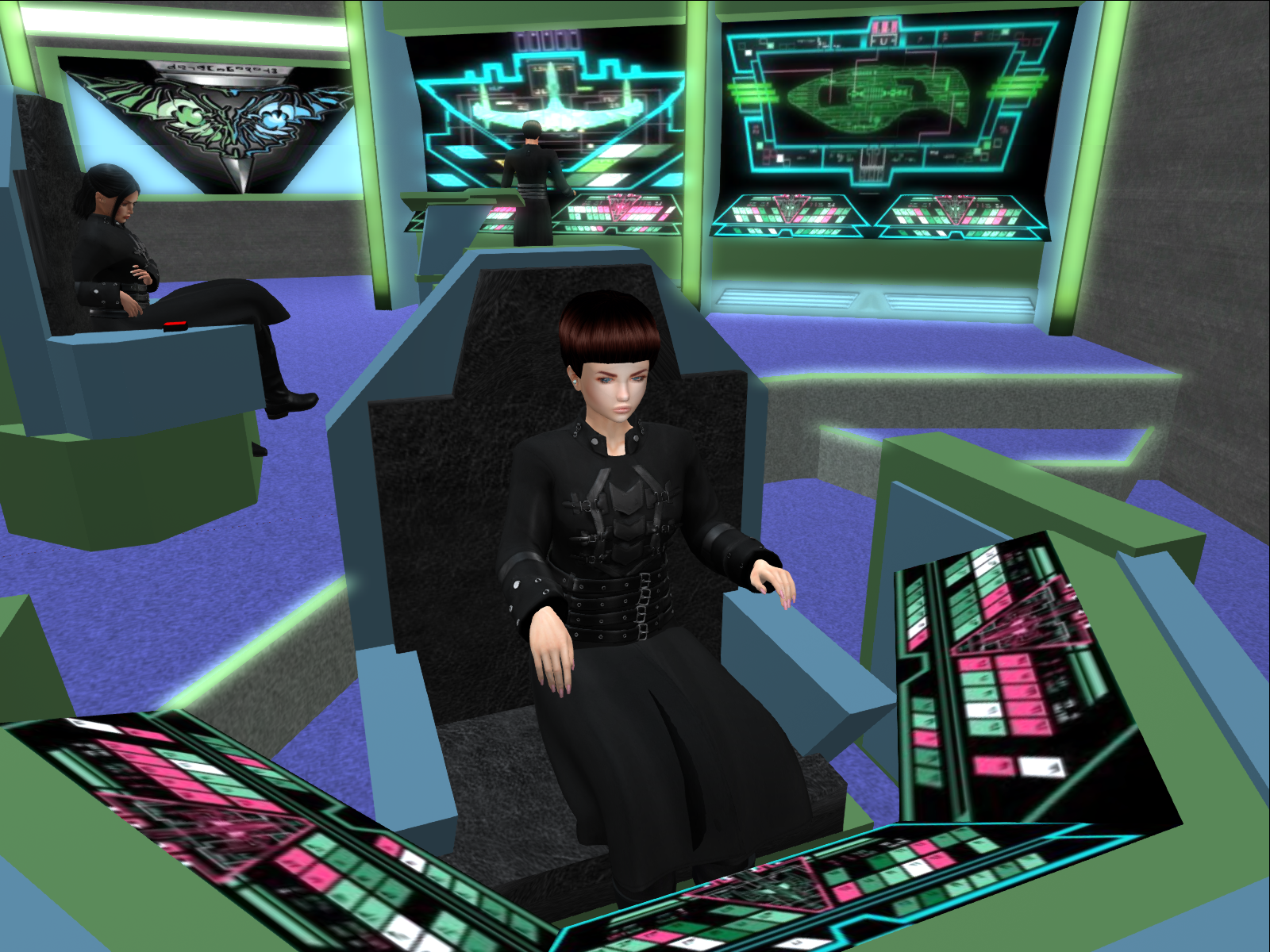 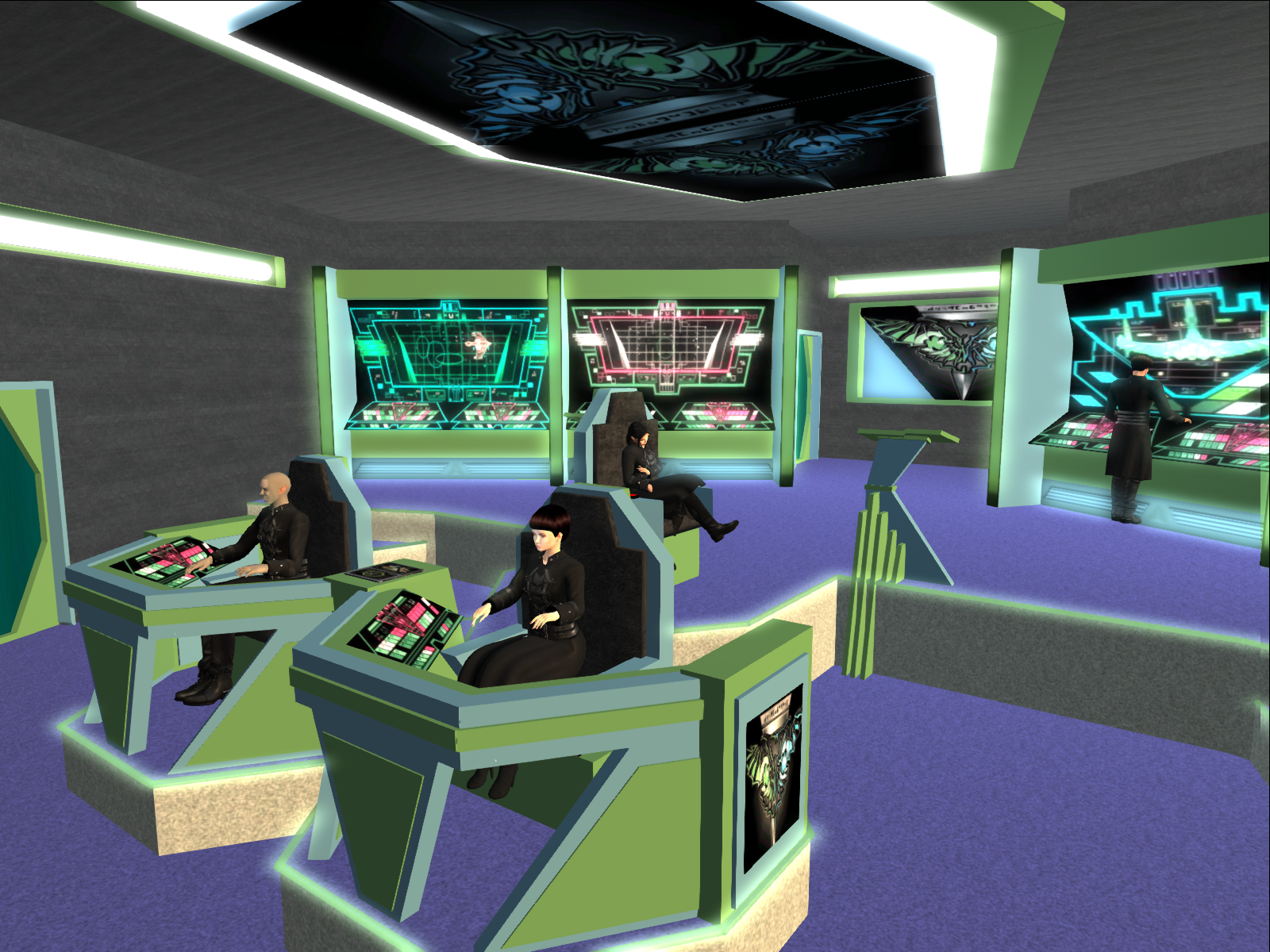