Position:Unnamed Planet along the border of Federation Space

During routine patrol, a Federation distress signal was picked up and USS Veracruz investigated the planet only to find warp coils in orbit around the originating planet. Surface scanning eventually confirmed that a starship had crashed on the planet below. No Federation starships had been reported missing in this area and as a result, a full investigation, including a substantial Away Team was sent down. 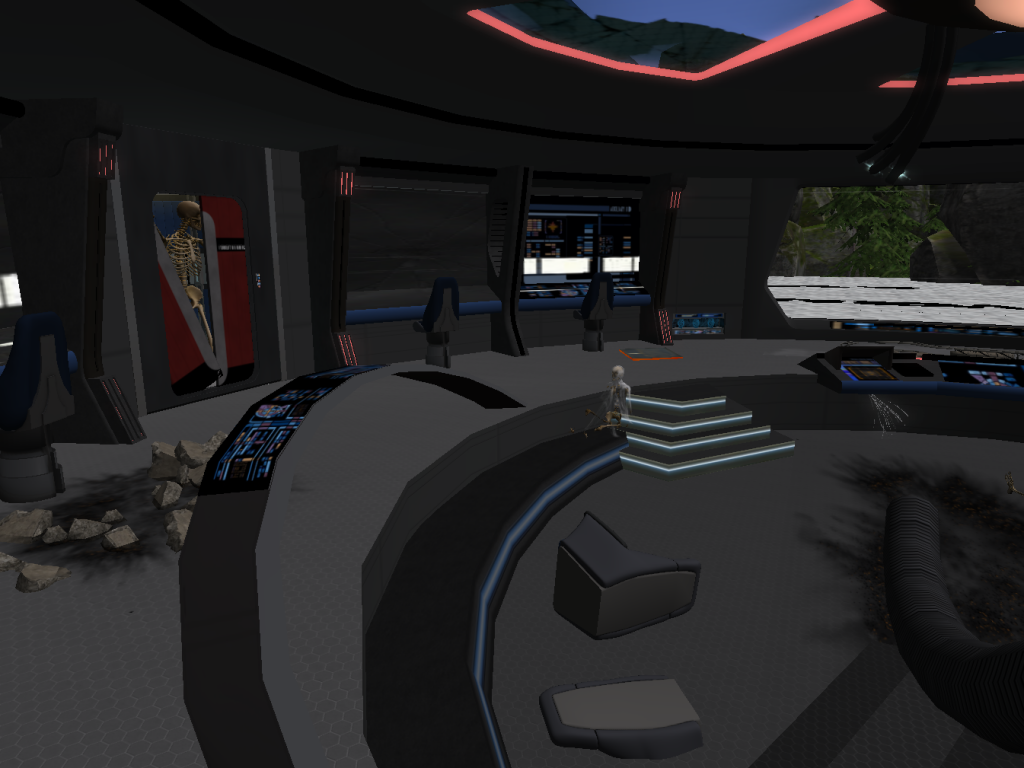 Beaming down onto the saucer section of the starship yielded a display of the ship’s name and designation: USS Veracruz NCC 200808, something which was obviously both surprising and upsetting to the Away Team that had just left the USS Veracruz in orbit above. 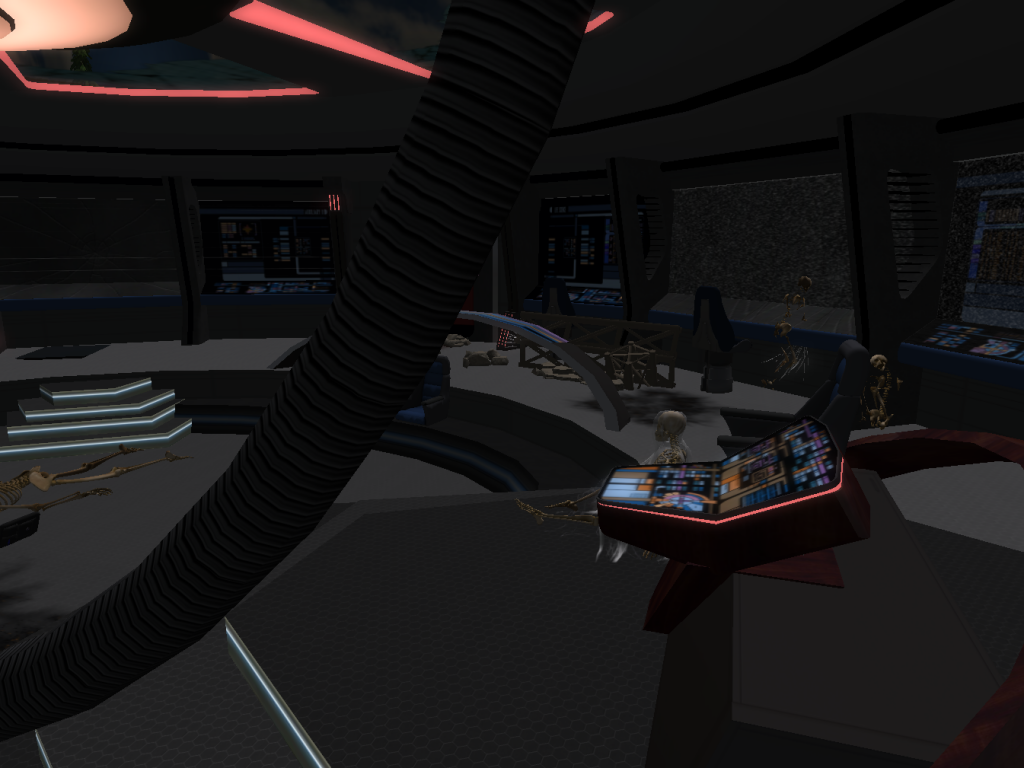 Upon entering the bridge of the vessel, remains that had already decayed to the point of displaying skeletons were found throughout the bridge. The remains were confirmed to be those of the Away Team currently investigating the crash. At this point, the Away Team is working to retrieve logs and information from the crash site, as well as investigate the remains and other clues in order to discover how this anomaly took place. 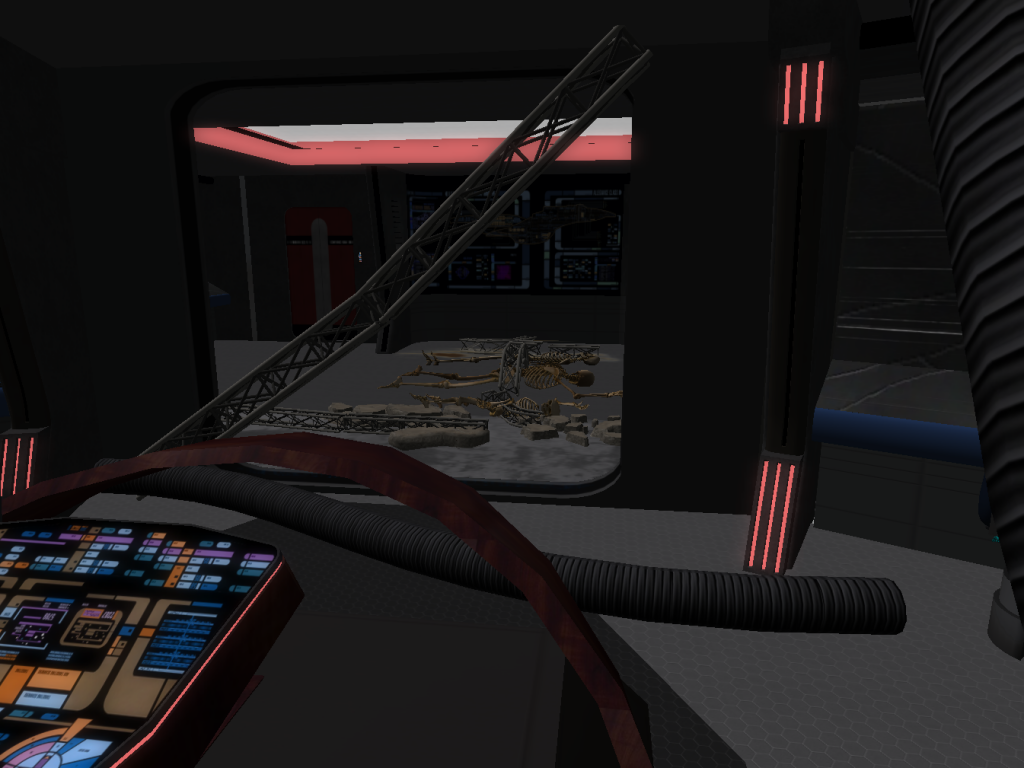 
In Service to the Fleet,

Position:Unnamed Planet along the border of Federation Space


Fleet Captain Moonprince Rhode-Randt-Mistswallow handed the now dead tricorder to Admrial Randt without taking his eyes off the scene in front of him. Taking a deep breath Moon once again squeezed his son's hand before stepping away into the wreck that was once Kinney's office.

After verifying his tricorder was linked to the main computer of the Veracruz in orbit he tapped his badge "Chief Engineer's Log, Stardate.... Stardate 220629"

Moon closes his eyes for a second trying to organize his thoughts but all he can see is the scene behind him. "I am standing in an engineer's...., no a husband's...., no a fathers worse nightmare all rolled into one. The wreck of my ship, and the bodies of my friends and family."

Moon pauses as his voice breaks at the end his last sentence. "While on patrol, the ship detected an emergency black box signal from a federation starship. The signal was badly garbled but we laid in a course to track down the source of the signal. We entered a system on the edge of Frederation territory that was not currently mapped. Sensor readings were garbled by something in the system, but local scans showed debris consistent with an exploded ship."

"Past the remains of what was preliminary readings indicated was the 4th planet, we isolated a large metallic mass on the 3rd planet. Sensor were not able to fully read the planet surface due to radiation in the upper ionosphere. This radiation did not affect our transporters so we were able to beam down to a mountain valley. Just out side the valley, we located the crashed remains of the....." his voice breaking again, he pauses and takes another deep breath. "The broken remains of the Veracruz's saucer section."

Trying to continue in a detached and clinical way. " The Saucer shows damage consistence with a high speed impact with the planet surface. All decks below deck 3 are either pancaked into one another or are too structurally unstable to attempt exploration. The away team was able to enter the wreck thru a hole in the lounge window. Inside we found massive damage, as well as skeletal remains of several members of the crew."

"The main computer was destroyed but I was able to restore emergency power to the bridge by using the last remaining emergency generators from deck 2. Commodore Aryela was able to download what logs remained in the bridge computer sub processors. Based on preliminary review the crash happened approximate one week from today. A more formal review of the data will need to be done to see if we can prevent this possible future."

The only constant in the universe is change.
Top
Post Reply
2 posts • Page 1 of 1