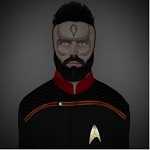 One of the probes we had sent out was hit by an unseen object that we noticed was a shuttle.
Our sensors showed a shuttle uncloaking and they appeared to be charging weapons. We sent ships to engage and braced for impact.

We were required to place the shield regenerators at optimum and as a rotating flux. Chief Science gave the shield rotation job to Ensign Apple and she did it without hesitation. The shuttle self destructed, the damage force was extreme, equaling 24 photon torpedoes. We rotated the shields, modulated the fluctuations.

We deployed more probes. and continued to monitor closely. We found out that we could prepared a shock wave, to see if there are any cloaked ships. Also to make sure there were no boarding parties already on the station.

Captain wanted to know what the energy spikes meant, and what to expect if he sent us out there to investigate. We found out that we were to increase our shields, and look for singularities and wormholes.

And a wormhole was confirmed, but unknown origin at this time. We sent out a probe to generate a magnetic field so it could go further into the anomaly.
A starship came through the wormhole, made of antimatter, from an antimatter universe. It appeared to be a starship.

A Captain Mandible of the Starship Adventurer were the one making contact with us at first and they are from an antimatter universe.
Alien ship arrived in distance, due to unable to survive in matter we offered them to erect a magnetic shield around them. We also gave them aid in producing correct amount gravitons to form another wormhole for them to exit by.

There was radiation released, including an exposure to 10,000 rads to the lab area. However, there was no residual radiation.


Previously, we can discovered anomalous readings, which later proved to be a wormhole form another dimension. A Starship had come through the wormhole, but was unable to survive the conditions of our space. We had helped them return, using graviton to help induce another wormhole.

The wormhole was induced by the use of gravitons. Normally, gravitons are not able to induce this level of spacial distortion, but they were able to utilize injectors of unknown type to induce the wormhole. The buoy is indicating that there is some instability in that area. As such, we are demonstrating caution in approaching the buoy. A Science team suffered from radiation exposure. We are down to three science teams. It appears our research projects made it out intact.

In addition, the Tranquility suffered from warpcore destabilization, a catastrophic disaster. All the decks filled with radiation. The warp core was ejected, and we evacuated to Goddard.. We are now preparing to return to Starbase Tranquility and conduct operations, while the Starbase is under repair.

The pets were also safely evacuated, and being returned to their owners.


We are headed to survey an uninhabited planet today, with some pretty interesting radio transmissions. Saterios IV has never been of interest before, but Starfleet Intelligence has sent word in that we have intercepted encrypted transmissions emanating from a site on the planet's surface.
this world is class M. According to our records, this planet is approximately 4 billion years old, with reptiles, amphibians, and fish, as well as arachnids, and the usual flora. There is no reported intelligent indigent life forms.
a beautiful world, with emerald forests and sapphire seas.

We worked with Mr. Yalin to determine the source of the transmissions, as well as the determine if there is any species which would be operating it.

It was suggested I have the manifest with support of inoculates that could be required if there are contaminants, as well as viral, or bacterial agents. A Class 3 probe was prepared and launched.