The UFS Promotions and Awards department is responsible for any and all Promotion & Award Requests. 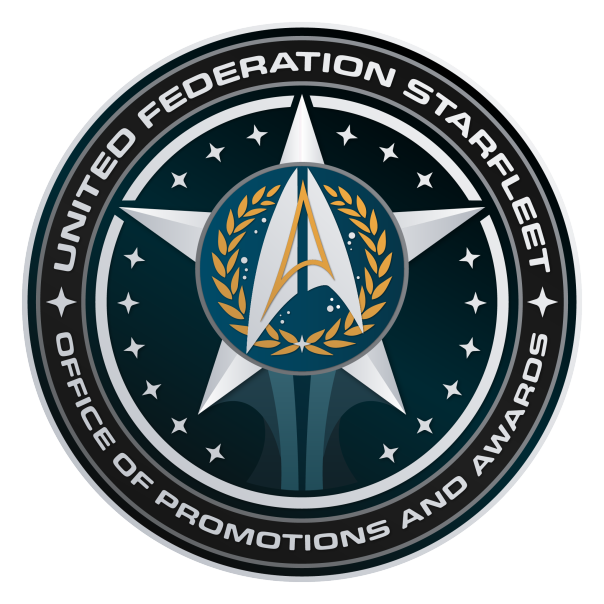 Stardate: 220927
From the Office of the Director of Promotions and Awards
promotions@ufstarfleet.org

Hello All:
Please be advised that I am now taking your recommendations for DISTINGUISHED SERVICE AWARDS for the Admiral’s Banquet in November. Descriptions can be found in the Awards Manual under Section “2. Special Awards, 2.1 Distinguished Service Awards”. https://tinyurl.com/UFSDSA

Please read the award descriptions carefully before submitting. As there is a high volume of nominations during this time, we may not be able to respond to you quickly for feedback. Remember, you can always use the worksheet for awards to help you write your nomination here: https://tinyurl.com/AWRDPLAN

The date for closure of this file is the 12th of November and AwardReqs must be clearly indicated as ADMIRAL’S BANQUET as the first two words in the recommendation area. They should be sent to the regular form at: https://tinyurl.com/ADMRBQ . If you need further aid or would like any clarification of details please let me know via email or through Discord or by contacting promotions@ufstarfleet.org .

In service to the fleet,
CMDR Ulrich Bechir
Director of Promotions and Awards
United Federation Starfleet

A reminder, you MUST put ADMIRAL'S BANQUET, when writing your Nomination Request for these awards so they do not get mixed up with other awards!

There is a chance they could get lost and subsequently thrown out if you fail to do so.

These are SHORTENED descriptions of each of the Distinguished Service Awards:

Presented to individuals who excel at administrative jobs. These individuals work hard behind the scenes to ensure UFS run smoothly for everyone involved.

Given to those in command who have gone more than above and beyond in their positions, striving to lead by example and creating an environment that welcomes and facilities all members.

Awarded for Leadership, Creativity or Initiative from members. Bronze for Ship of the Line,  Silver for Sector and Gold for Fleet. This does not reflect the post of the member but the level the activity occurred on.
Example if the Chief of Communications  comes up with an idea to help all Ships of the Line  it would be Bronze, if Sectors its Silver, Fleet then Gold.

Presented to individuals who have shown a commitment to their tasks and duties at United Federation Starfleet. These individuals have worked tirelessly to ensure the goals of their post are constantly moving forward and progressing, gaining them the respect and admiration of their peers

Mediation or Problem Resolution - Awarded to a member who has played a key role in problem resolution or mediation between UF Starfleet members, ships or sectors.

Presented to a UF Starfleet officer whose actions have helped to distinguish UFS from other groups. This award is given for a singular action that helps advance or elevate UF Starfleet as a whole. Through their efforts and dedication have improved UFS as a whole.

Presented to the commissioned officer who has been active for at least 1 year. This individual is a leader in UFS and has served the Federation to the best of their ability, attempting in all their actions to be a proper representative of UFS. In addition to their leadership, these individuals are always willing to help others. Dedicating much of their time and service to Roddenberry's ideals.

Awarded to a member for significant activity in promoting Star Trek, development and implementation of fun, Star Trek-themed ideas, and Star Trek fandom as a whole

Awarded to members for excellence in inventiveness or craftsmanship in an aspect related to their ship of the line, sector or UF Starfleet

Presented to a member of UFS, enlisted or commissioned, who has been active for less than 1 year. During their time with UFS this individual has served the group well and attempts in all their actions to go above and beyond the call of duty to make UFS better.

Presented to a member of UFS who has shown excellence in the entirety of their duties and service to United Federation Starfleet. These individuals have dedicated much time and energy into making UFS a better place for all the members. Sacrificing their free time and personal desires to further the dream and realization that is United Federation Starfleet. One must be an active UFS member for at least 1 year to be able to receive this award


Order of the Shining Star

Presented to members of UFS who have shown an unparalleled commitment to their duties. Through the perseverance and dedication of these fine members, UFS has been able to soar to new heights, setting a bright and shining beacon for others to follow and emulate. These individuals are the face of UFS and as such their duties and actions are at all times that of one befitting a Starfleet Officer. They inspire further greatness in those around them, by their actions allowing others to excel and shine with them One must be an active UFS member for at least 1 year to be able to receive this award

Awarded to a member for significant activity in UF Starfleet. Said member has visibly sacrificed their time and energy for UF Starfleet, working not to advance themselves but the group as a whole. This member has been so hard working, so active and recognized so much for it that their name is synonymous with duty and commitment to UF Starfleet and the ideas Star Trek is based from.


Awards can be submitted here: https://tinyurl.com/ADMRBQ

I have also made available a worksheet for you to download/copy paste before you submit.

It can be found here: https://tinyurl.com/DSAWrksht

Return to “Promotions and Awards”