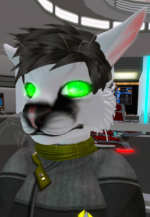 It's has been a long while since I wrote one of these, and ever since with new leadership at its figurehead, things have been quietly busy for myself lately.

By now you have noticed a few changes since the last update, being:
Yes I admit, we have been slacking off a bit, there has been several of you providing feedback over slowness of the website lately, non responsive forums and other minor issues. We're looking at how we can fix this and improve this over time.

We are working on the R&D side over ideas to reintegrate UFS together, the first being the SL events chat to Discord, allowing our members in RL, or even members on the go or even anyone that are not able to attend certain events to reexperience it all over again on the UFS Discord.

Suffice to say, this seems to be a hit for everyone with Promotions/Events happening often and being broadcasted live on the UFS Discord at #ufs-events!

We are also working on a few projects that are slowly being worked on, thanks to feedback received from the members. (My DMs on Discord are always open for feedback if you were wondering how the bleep are feedback being received!)
These are only some of the ideas that are currently being brewed in the CompOps R&D brain. We are in severe need of people who are good with web developing/server administrator/support staff/beta testers over some new ideas so if you feel up to it, open up a ticket in the UFS Discord and let your name be heard!

Over on the support side, Commander Andrew Kerr has been manning the Support side. Granted there are times that it did take a while for it to be worked on, no thanks to the changes we keep performing for support, he's has been performing the best he can at supporting the whole UFS membership over whatever issues that you have. A small appreciation comment here would be nice for him if you have read this far!

That comes the end of my post, but the main points I want to reiterate is, feedback is ever welcome to us, just hollar it straight to me if you want to keep it on the down low via the UFS Discord or leave it on a CompOps Support Ticket on UFS Discord and we will receive it and figure how to improve it!

Thanks to you for keeping up with the updates, and may the next CompOps guy keep it up! packs his bags and runs away before any DC or CiC catches him